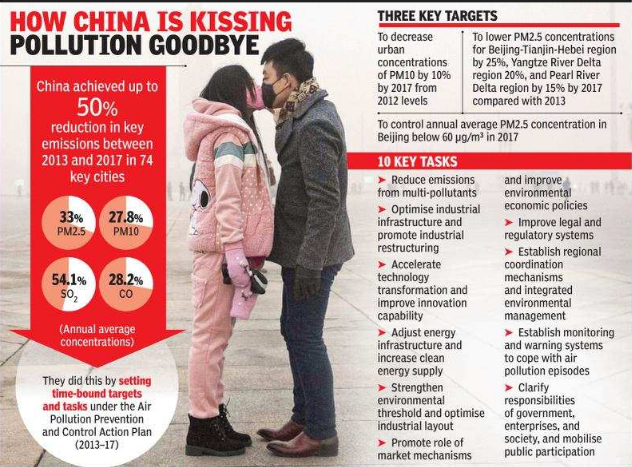 NEW DELHI: A new Lancet study on the impact of China’s Air Pollution Prevention and Control Action Plan (2013-2017) could be a document of interest to a city like Delhi that is struggling to fight pollution.

The study by Peking University School of Public Health found that annual average concentration of PM2.5 decreased by 33.3% in 74 key cities where the plan was implemented in the last five years.

Researchers found that PM10 levels reduced by 27.8%, sulphur dioxide (SO2) by 54.1% and carbon monoxide (CO) by 28.2% in five years, but no significant improvements were seen in nitrogen dioxide (NO2) or ozone (O3) concentrations.

“To our knowledge, this is the first study to comprehensively evaluate the long-term health impact of China’s air pollution control policy at the national level. Appreciable reductions in concentrations of air pollutants were observed from 2013 to 2017… the APPCAP in China is similar to the Clean Air Act. It sets quantitative air quality improvements goals for key regions within a clear time limit and lists 10 key actions covering all major aspects of air quality management,” the study stated.

It concluded that though direct comparisons of its effects with those of Clean Air Acts in the UK and the US were difficult because the APPCAP was only introduced in 2013, a key strength of the legislation was that it demonstrated China’s ability to control air pollution.

What Delhi can learn

Union environment secretary CK Mishra recently said the National Clean Air Programme (NCAP) would have three timelines to gradually reduce air pollution and bring it down by 70-80% from the current levels in 10 years. Under the timelines, air pollution in these cities — Delhi, Mumbai, Pune, Kolkata, Bengaluru, Chandigarh, Allahabad, Varanasi, Kanpur, Jaipur and Patna, among others — will be reduced by 35% in the next three years, 50% in the next five and 70-80% in the next 10 years.

No time-bound targets for NCR

The plan may come in to force from August 15 this year, but the latest NCAP isn’t yet in public domain. Experts say NCAP document requires an effective compliance strategy to meet targets like China did. In fact, the “Comprehensive Action Plan (CAP) for Air Pollution Control in Delhi and NCR”, which has been notified by the Union environment ministry under Section 5 of the environment protection Act, doesn’t have any time-bound targets.

The SC-mandated EPCA had suggested a reduction of 69.7% in PM2.5 concentrations and 74% in PM10 concentrations is needed in Delhi and NCR to meet the annual average safe standard in the draft comprehensive plan. But these targets were not included in the notified version at all.

“I think the message is clear. We need clear air pollution control targets and a plan to meet them. The process has to be verifiable similar to how China has done it. The level of stringency needs to be very high and it should be monitored at every milestone and verify whether it’s on track. The notified version of CAP doesn’t have targets. How do you calibrate the plan if there are no verifiable targets?” asked Anumita Roy Chowdhury, executive director, Centre for Science and Environment.