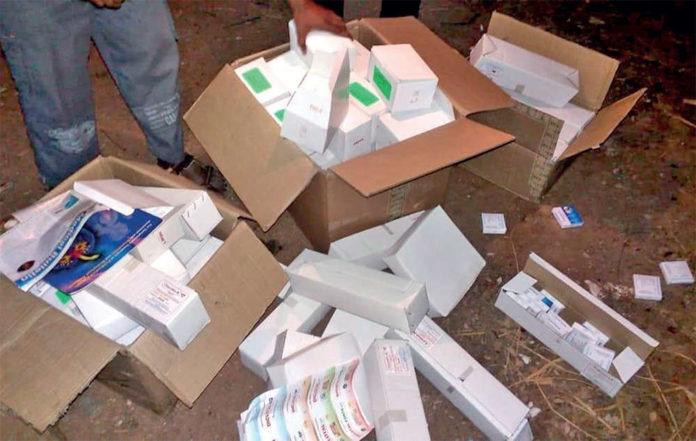 On Saturday night, residents of BTM Layout found 15 big cartons of medicines, with tablets, syrups and syringes inside, dumped at an open ground in 2nd Stage, BTM Layout.

It is strange but true. 15 big medicinal cartons containing tablets, syrups and syringes were found dumped at a ground in the BTM Layout 2nd stage on Saturday mid night. “My friend was on his way back from work. He found many strips of tablets strewn on the ground. Then he saw some cartons. He called me and some other friends. We went to the spot immediately and were shocked to see so many medicines and 15 big cartons,” said Mohammad Musaddiq, a resident of BTM Layout.

Musaddiq and other residents then examined the boxes and found that all the medicines inside the boxes were fit for consumption. The expiry year date was 2022 for all the medicines that were salvaged. “We emptied the boxes of drugs in all the cartons. Then we started looking for the bills. They were not found in the cartons. The ground also has a spot where people dump garbage. Just near the garbage dump, we found a few bills with the purchaser’s name, medicines name, seller’s name, address of the pharmacy listed. We took the bills with us and left the boxes at the same place,” said Naveen S, resident of BMT Layout.

The next morning, the residents informed the Bruhat Bengaluru Mahanagara Palike (BBMP). Since it was a Sunday, nobody turned up. The residents took the box of medicines to a pharmacist close by and asked them to calculate the cost. “On calculating the price of all the drugs, syrups and syringes, the cost came up to Rs 80,000. The pharmacist told us that they were expensive drugs,” said Naveen.

In the early hours of Monday, Shadab Haider, BBMP’s Senior Health Inspector of BTM Layout Division, and Special Commisioner (Solid Waste Management) Randeep D, came to the spot and had a close look at the drugs and syringes. They took back all the medicines in the cartons and checked on the bills. The BBMP officials found out that the medicines which were listed in the bill and those dumped on the ground were the same. “After checking up on the entire thing, we found traced them to Shri Banashankari Pharmacy in Arkere that sells medicines to different pharmacies. We immediately went to the place and closed down the godown,” said Shadab Haider.

Speaking to BM, Special Commissioner (SWM) Randeep D said, “We still have to investigate on this issue as the owner denies having dumped the medicines. But till then, the godown will be closed. We are in constant touch with the Chief Health Officer, to check on what amount should we penalise them with. We will also find out whether the medicines were illegally purchased or are fake.”

However, the residents found another stash of dumped medicines in another part of BTM Layout on Tuesday. “We will have to check this too, said another BBMP official.