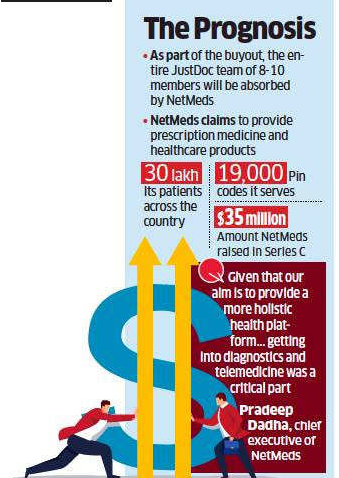 NetMeds acquires JustDoc for just under a million While the terms of the transaction were not disclosed, Netmeds is believed to have paid a little under $1 million to acquire three-year-old JustDoc, which counts former Infosys senior executive TV Mohandas Pai, InMobi cofounder Mohit Saxena, TaxiForSure cofounder Raghunandan G as its angel investors and Singapore Angel Network and Tracxn Labs among its list of backers. All the investors of JustDoc, who had invested an undisclosed amount in the Bengaluru-based venture, are believed to be exiting the startup, post the closure of the deal.

“We were looking to add diagnostic services, given that our aim is to provide a more holistic health platform to our consumers, particularly those dealing with chronic health issues… Getting into diagnostics and telemedicine was a critical part,” Pradeep Dadha, chief executive of NetMeds, told ET.

This is the second acquisition by NetMeds, which competes with the likes of Sequoia Capital-backed 1mg. The latest buyout, according to Dadha, has been funded from the proceeds of the company’s last equity financing round, which was announced earlier this month.

NetMeds had raised $35 million in its Series-C round, which was led by Singapore-based Daun Penh Cambodia Group, and also saw participation from its existing set of investors, a list that includes Sistema Asia Fund, the venture capital arm of Russian conglomerate Sistema JSFC and Tanncam Investment, a Cambodian investment holding company, according to reports.