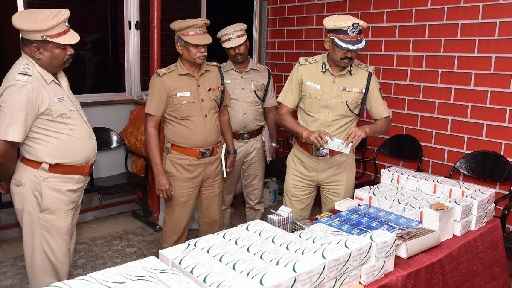 Madurai : Madurai City Commissioner of Police, T. Senthil Kumar, looking at sleeping pills and pain-killers seized from two persons who were selling them as intoxicants to people in Madurai on December 26, 2022.

Madurai City Police have arrested two persons and seized over 17,000 sleeping pills and pain-killers along with 105 syrup bottles which were being smuggled for selling among youths as intoxicants near Mathichiyam on Monday.

According to official sources, a team of police personnel who were carrying out a vehicle check at Asari Thoppu found two persons running away after abandoning a motorbike and also a man who was carrying some boxes.

The police nabbed the person, who was identified as S. Tamil Azhagan (19) of Vikkiramangalam.

During enquiry, Tamil Azhagan revealed that he had come with two of his friends, Dinesh and Gavaskar.

Dinesh, who has completed Diploma in Pharmacy, has been buying sleeping pills and painkillers from one P. Muralithaj (27), after getting his acquintance through social media.

Subsequently, the police team rushed to Anna Nagar and picked up Muralithaj. During interrogation, they found that Muralithaj, who also has a diploma in Pharmacy, had been running a medical shop and was in touch with medical representatives.

After continous action by the police, ganja was not easily available and hence he started to buy pain-killers and sleeping pills in large quantity and used to sell them to people from Madurai and its surroundings.

The police seized 17,030 tablets of different brands and 105 bottles syrup. All the tablets and drugs had passed their expiry dates, the police said.

Both of them were remanded in judicial custody. The police were on the lookout for Dinesh.