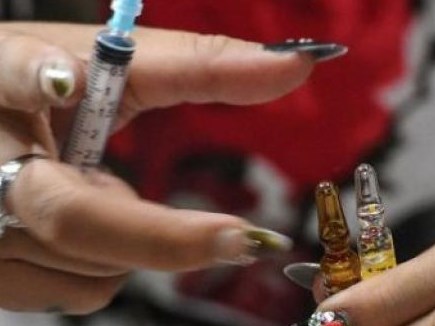 Oxytocin sale is completely banned in India from retail stores and people are using illegal methods to supply oxytocin because of its high demand. Two persons arrested recently by the West Zone Task Force for alleged illegal possession of oxytocin. Oxytocin is widely used to increase milk yield in cattle, but because of its side-effect, its usage banned because it can also cause cancer and hormone imbalance in humans.

Shaik Abdul Khaled came in contact with Mosir, from Uttar Pradesh in 2015, and started to buy banned oxytocin for veterinary use and start selling it illegally to earn money. Then after they learned to produce it in larger quantities, they mixed water with oxytocin injections — procured from various medical shops –– phenol i.p and crystal salt. And then they started to make money through selling and sold the substance to Mr. Gupta as well.

Even though, they arrested in 2016 by the Charminar Zone drug inspector but continued to manufacture it to make quick money and used similar methods to produce it.
They packed the banned oxytocin substance into 140 ml, 180 ml, and 200 ml bottles and sold it those in need. The task force raided Mr. Gupta’s Banwarilal Suresh Kumar Bansal, Chunni Bhoosa Shop on the basis of the hint they received and arrested them. During the investigation, the accused open his mouth and led police to Mr. Khaled. The duo has been handed over to drug inspectors of the Mehdipatnam and Charminar zone for further investigations.