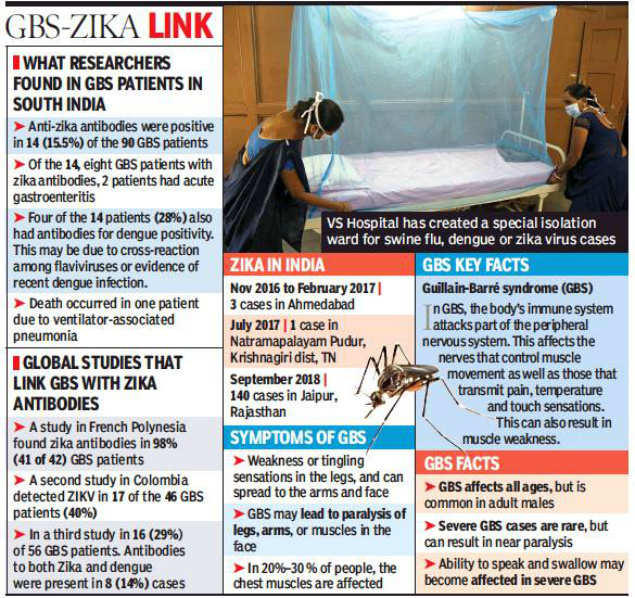 AHMEDABAD: Researchers analysing patients suffering from Guillain-Barre syndrome (GBS) in South India recently found antibodies that combat zika virus (ZikV) in their blood samples. This has already put Gujarat health officials on the edge as it was the first state to report zika virus presence in the country last year.

The National Institute of Virology (NIV) has already told Gujarat that the zika virus strain isolated in Ahmedabad this year is a completely different from the one currently causing an outbreak in Rajasthan (central and south American strain). Last year, NIV had isolated a ZiKV strain called NIV1720741/1845ZKV, from Ahmedabad which had a distinct sub-lineage of the Asian genotypes.

Paralysis fear in zika ground zero
In case of the GBS, the researchers were from departments of general medicine and microbiology from Jawaharlal Institute of Postgraduate Medical Education and Research (JIPMER) in Puducherry. The scientists found antibodies that combat zika virus in 14 of the 90 adult patients suffering from GBS. These patients were all aged above 12 years.

GBS is a condition where the body’s own immune system begins to attack parts of the peripheral nervous system. This affects the nerves that control muscle movement of the body-including hands, legs, face and other parts. Of the 14, eight GBS patients with zika antibodies had acute gastroenteritis. The JIPMER researchers, Dipti Baskar, Deepak Amalnath, Jharna Mandal, Rahul Dhodapkar and K Vanathi also found that four GBS patients with antibodies for ZiKV also had antibodies against dengue virus as well. This according to them may be due to cross-reaction among Flaviviruses (family of viruses that include West Nile, dengue, tick-borne encephalitis, yellow fever) or evidence of recent dengue infection.

These observational tests on GBS patients were being carried out between July 2015 to August 2016, at JIPMER, Puducherry while the results were only published two years later in September this year. Interestingly, on November 9, 2016, Ahmedabad recorded its first zika virus positive case and reported two more till February 2017. “The antibodies for dengue may be offsetting the zika virus. We have begun large scale surveillance,” a senior health officials said.

In a detailed press meeting on Friday health commissioner Jayanti Ravi had said, “There are studies that depict a possible link of GBS with ZikV. But we are yet to get confirmed results in our context.”