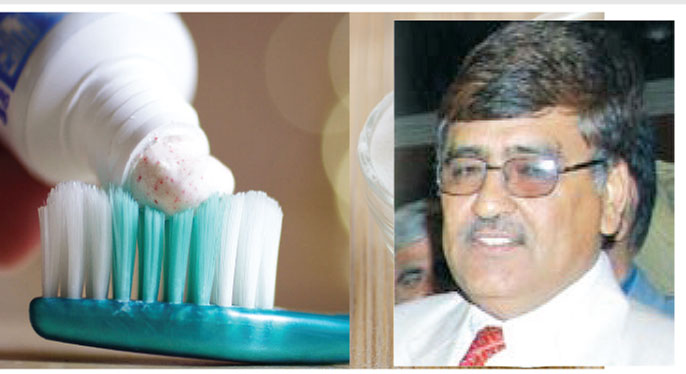 “Whereas the Central Government is satisfied on the basis of evidence and other material available before it that the use of tobacco in toothpaste/tooth-powders is likely to involve risk to human beings and that it is necessary and expedient in the public interest so to do.

Now, therefore, in exercise of powers conferred by Section 26-A of the Drugs and Cosmetics Act, 1940 (23 of 1940), the Central Government hereby prohibits the manufacture and sale of all cosmetics licensed as toothpastes/tooth-powders containing tobacco.”

These products were banned/prohibited by the Govt. of India mentioning the reason therein in the notification itself. It is pertinent to mention that tobacco/nicotine when used orally is the major cause of mouth and lungs cancer. Prevention is better than cure therefore to prevent increasing number of mouth/lungs cancer cases weighing the risk benefit ratio, Govt. of India rightly prohibited the toothpowders and toothpastes containing tobacco/nicotine.

Toothpowders and toothpastes are cosmetics as defined u/s 3(aaa) of Drug Act, 1940 and definition of cosmetics is reproduced as under:

“Cosmetic means any article intended to be rubbed, poured, sprinkled or sprayed on, or introduced into, or otherwise applied to, the human body or any part thereof for cleansing, beautifying, promoting attractiveness, or altering the appearance, and includes any article intended for use as a component of cosmetic.”

For toothpowders and toothpastes standards and minimum requirements for manufacturing of these products are prescribed under Schedule M-II (point j) which clearly proves that whatever product which is used as toothpowder or toothpaste (not containing any drug/medicine) is a cosmetic. Therefore, the product “GUL” which is manufactured by the tobacco companies under the garb of Tobacco Act and COTPA (Cigarette and Other Tobacco Products Act) is a clear violation of /and in contra version to provisions of Drugs and Cosmetics Act.

Moreover, since health of poor people is a major issue and prevention is always better then cure and this product “GUL” is commonly and mostly used as toothpowder by very poor class of people and also used as intoxicant, tobacco/nicotine intoxication is a major problem in the country and a root cause for increasing crimes because a study by a reputed group clearly indicates that most of the crimes are done by the criminals under the effect of intoxication. Therefore, to prevent the crimes and to lower down the crime ratio in the country, it is necessary to create awareness against the evil effects of intoxication. To create awareness against the intoxication general public must be made aware of the harmful effects of the intoxicants. In the instant case tobacco/nicotine intoxication especially in the form of toothpowder and toothpastes containing tobacco/nicotine is the root cause of mouth/lungs cancer.

Therefore, this product is required to be prohibited and permission to manufacture should not be given under provisions of Tobacco Act and COTP Act.