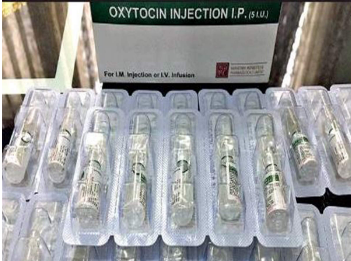 New Delhi: Unauthorized sale of Oxytocin by a chemist shop in East Delhi’s Gazipur area came to light during a raid by the Central Drugs Standard Control Organization (CDSCO), the Union Ministry of Health and Family Welfare said on Sunday.

Oxytocin is a peptide hormone which is being misused mostly in the dairy industry, where livestock are injected to make them release milk.

According to the ministry, a surprise check was carried out in various chemist shops, departmental stores and diaries in Gazipur on Saturday.

The shop does not hold any license for sale and distribution of drugs. Samples of the seized bottles have been sent for test/analysis, the ministry said.

CDSCO had in 2015 raided various places in the same area and seized a large quantity of Oxytocin bottles from some stores and unlicensed premises.

The ministry had in April banned the sale of Oxytocin at retail private chemist stores and said that private pharmaceutical companies will have to stop manufacturing the drug from September. However, the Delhi High Court on August 31 had suspended the ban for a month.