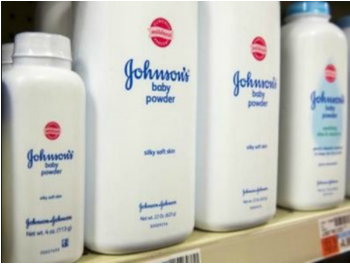 R St Louis (US): Nearly two dozen women who claimed asbestos in Johnson & Johnson talcum powder caused their ovarian cancer were awarded USD 550 million in damages by a St Louis jury in the first case against the company that focused on asbestos in the powder.

Punitive damages are still to be decided for the 22 plaintiffs in a case that began June 4 in St Louis Circuit Court.

Plaintiffs’ lawyer Mark Lanier told the jurors during closing arguments on Wednesday that this case was the first where jurors saw documents showing that Johnson & Johnson knew its products contained asbestos and didn’t warn consumers, The St. Louis Post-Dispatch reported .

Johnson & Johnson spokeswoman Carol Goodrich said in a statement that the company was disappointed with yesterday’s verdict but would not comment further until the punitive damages are announced.

The company has been sued by more than 9,000 women who claim its talcum powder contributed to their ovarian cancer. Johnson & Johnson has consistently denied that its products can be linked to the cancer.

Five previous cases have been decided and Johnson & Johnson has appealed those that it lost.

During closing arguments, Johnson & Johnson lawyer Peter Bicks said the company for years has exceeded industry standards in testing talcum powder for asbestos and cited several scientific studies and conclusions by US government agencies that he said found the company’s products didn’t contain asbestos and were safe.

“Yes, this is terrible,” Bicks said of the women’s cancer. “But just because something terrible happened doesn’t mean Johnson & Johnson had anything to do with it.” Six of the 22 plaintiffs in the latest trial have died from ovarian cancer. Five plaintiffs were from Missouri, with others from states that include Arizona, New York, North Dakota, California, Georgia, the Carolinas and Texas.

One of the plaintiffs, Gail Ingham, 73, of O’Fallon, Missouri, told The Post-Dispatch that she was diagnosed with stage-3 ovarian cancer in 1985 and underwent chemotherapy treatments, surgeries and drug treatments for a year before being declared cancer free in the early 1990s.