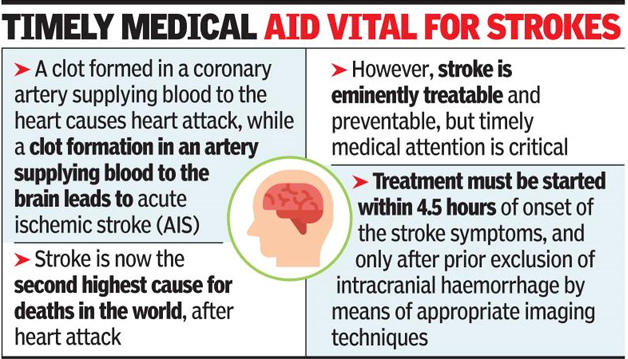 MUMBAI: Decks have been cleared for a more affordable stroke treatment — developed by domestic company Gennova Biopharmaceuticals — to go global. The Pune-based biotech company has been granted a patent in the US for its version of drug tenecteplase, to treat brain clots (ischemic stroke), the first ever in the world. Till now, drug alteplase has been largely considered the gold standard for treating brain strokes.

Stroke (hemorrhagic and acute ischemic stroke) is the second most killer in the world after heart attack. It is responsible for more deaths annually than those caused by AIDS, TB and malaria put together. Over 4,500 people have a stroke in India everyday, with most cases (about 80%) being ischemic in nature. An ischemic stroke occurs when the arteries leading to, or inside the brain, are blocked due to clot formation, leading to deprivation of glucose and oxygen to the brain, resulting in failure of brain function, and in many cases permanent disability and death.

Gennova Bio gets US drug patent to treat brain clots
In India, Gennova has already started marketing Tenectase (tenecteplase) for ischemic stroke as an alternative to drug alteplase, which reduced the cost of treatment by over 60% to Rs 29,000. Moreover, the launch of Gennova’s Tenectase in 2016 put the domestic company in direct confrontation with MNC Boehringer Ingelheim — which offers alteplase — with the fight ending up in courts.

Prior to 2016, tenecteplase — an improved clot buster and a third-generation thrombolyte (drugs used to dissolve blood clots) — was approved for heart attack. Based on research and clinical trials done by Gennova, tenecteplase was found to be an effective and safe therapeutic option for acute ischemic stroke (AIS) by the Drug Controller General India in 2016.

With the US addition, Gennova now has patents in major geographical regions including India, Australia and New Zealand, and in Eurasia (eight countries), and Europe.

Gennova Biopharmaceuticals CEO Sanjay Singh told TOI, “Getting the patent granted from the US Patent Office and other regulated markets is a great milestone for Gennova in solving an unmet need by cutting-edge science. We feel that the last 10 years of efforts will add value to society by providing affordable solution to a neurological disorder with very high morbidity and mortality rates.”

Reputed medical journal New England Journal of Medicine recently published a study, in which clinicians from Australia demonstrated that 22% of patients present with AIS had their blood flow restored, before surgical procedure (thrombectomy), on treatment with tenecteplase as opposed to alteplase, where blood flow was restored for only 10% of patients.