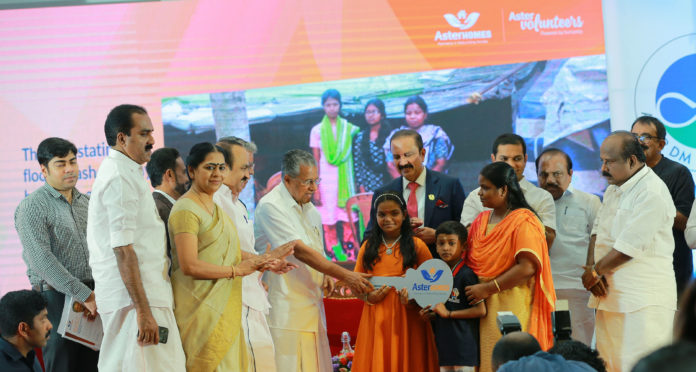 Dubai: Aster DM Healthcare has flooded Kerala, God’s own country, with its munificence. Out of 250 homes it promised to contribute to rebuild Kerala in the wake of unprecedented floods in 2018, 100 have already been handed over to victims.

Aster Volunteers, the CSR arm of Aster DM Healthcare have successfully completed the building of 100 ‘Aster Homes’. The keys of the 100th home were handed over to the beneficiary by the Chief Minister of Kerala Shri Pinarayi at an event held on 1st March at Kochi Municipal Corporation Town Hall. This marked the completion of the first set of handovers out of the 250 Aster Homes which was announced as a part of the Rebuild Kerala initiative to help thousands of people who have lost everything they possessed.

The Chief Minister had also felicitated Rotary International, partners of the project, and the people who donated land for the project at the event presided over by Soumini Jain, Mayor, Kochi Corporation.

“We at Aster Volunteers, are extremely happy today on being able to fulfill our promise to provide shelter for a large number of the devastated victims of Kerala floods 2018.  Out of the 250 Aster Homes we promised, when the state was hit by the unprecedented tragedy, we have completed 100+ Aster Homes.We are humbled and honoured to be a part of the Rebuild Kerala Mission under the dynamic leadership of Honourable Chief Minister Shri PinarayiVijayan who has handed over the keys to the beneficiaries of Aster Homes at the function in Kochi. Aster Volunteers express sincere thanks to all those who supported this humanitarian initiative through various means. We hope to complete the mission to build 250 Aster Homes in a year’s time. The next phase of construction of the remaining houses is in progress,” said Dr. Azad Moopen, Managing Trustee of Aster DM Foundation. He added that with the success of the initial phase, many philanthropists have come forward to be a part of the initiative andwere honored at the event.

Aster Volunteers is building a total of 250 houses for the flood victims under the Aster Homes project. In the first phase, Aster Volunteers havecompleted 45 houses in Wayanad district, 33 in Ernakulam, 7 each in Alappuzha and Kottayam, 5 in Pathanamthitta and 4 in Kozhikode among others.Dr. Azad Moopen further said that Aster Homes will also build houses for the flood victims of 2019 on land donated by the local government bodies, organizations and individuals in places such as Kavalappara in Malappuram district and Puthumala in Wayanad district.