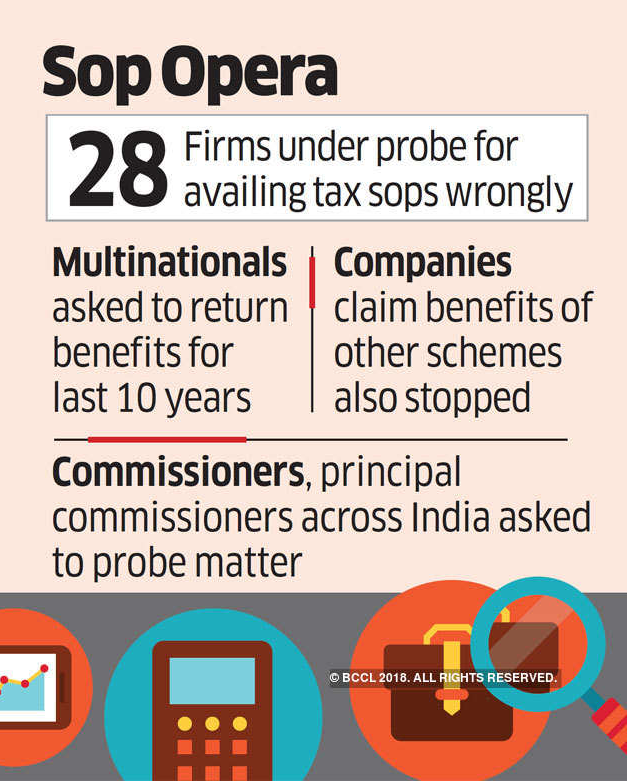 MUMBAI: The Directorate of Revenue Intelligence (DRI) has begun investigations into 28 companies that have wrongly claimed services export benefits, according to the agency, which has issued notices to them. They include a New York Stock Exchange-listed pharma company focussing on livestock and pets that has an R&D centre in India, an IT product company and a few five-star hotels.

DRI alleges these companies claimed export benefits — mainly tax sops — reserved for Indian firms for promoting domestic brands overseas and they need to return the money. DRI asked officials to initiate the adjudication process in its May 28 notification, of which ET has a copy.

This means the companies have to either pay up or begin litigation proceedings. The magnitude of the sum involved is unclear.

The investigations relate to the Service From India Scheme (SFIS) intended to promote a ‘Served from India’ brand for services, like ‘Made in India’ for goods. Under this, exporters were issued ‘duty credit scrips’ equivalent to a certain portion of their forex earnings. They could set off these credits against import duty on capital goods.

28 companies under lens for wrongly claiming services export sops
The May 28 notice sent to commissioners across India asks them to investigate whether the companies claimed credit for services that were authorised under the foreign trade policy.

As per the notice, in some cases, a first set of notices had been issued in December 2017 and April 2018 with a corrigendum in May.

According to the investigating agency, some MNC subsidiaries were “not promoting an Indian brand, but just extending interests of a foreign brand”, so they weren’t entitled to the benefits.

There was no response to queries from the firms cited above.

Duty Credit Scrips were Traded
In some cases, the government has been denying companies the benefits of a successor scheme — the Service Exports from India Scheme (SEIS), said people with knowledge of the matter. The government replaced SFIS with SEIS in 2015.

“SFIS and SEIS are two independent export benefit schemes and there is no legal rationale in holding back eligible SEIS benefits to exporters of services for the sole reason that SFIS issues are pending resolution,” said Suresh Nair, partner, EY India.

Investigators are also checking whether the duty credit scrips were misused, sources said.

“The problem is not just whether some companies have correctly classified the services which are eligible for the scrips but also what would happen to those companies that have bought these defaulting scrips,” said Abhishek A Rastogi, partner, Khaitan & Co. “In several cases in the past, investigations have revealed that these scrips were often traded and shell companies would buy these only to set off their tax liabilities.”

According to another person in the know, many Indian companies and brokers were treating these scrips as currency. They would buy them through middlemen and then use them or sell them to other companies. Investigators suspect some of these scrips may have been sold to shell companies that may have taken the benefit of these tax sops when they were not eligible.