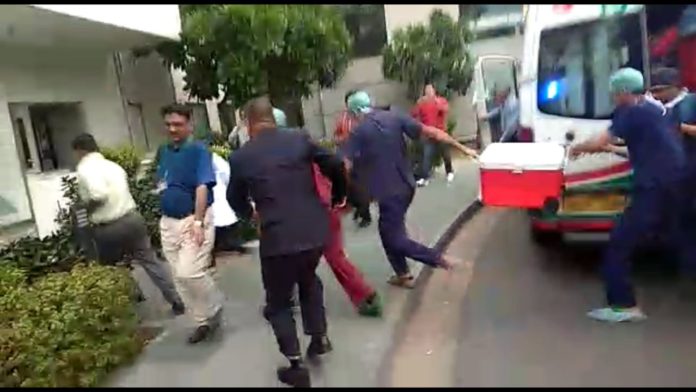 New Delhi: In a heartwarming triumph of life over death, a live heart of a dead man on June 26 travelled all the way from Mumbai to Delhi’s Fortis Escort for transplant to save a dying woman.

It was a first Inter City roller coaster ride of a live heart of a 42 year old man covering 1178 kilometers in about 2 hours and thirty minutes. A heart transplant surgery is currently underway to transplant the live heart to save the life of a 53-year-old woman. The team of doctors is led by Dr Z S Meharwal, Director, Cardio Thoracic Vascular Surgery, Fortis Escort Heart Institute (FEHI). Whether transplant turns out successful or not is immaterial. The donation and the huge effort to save life in itself are highly commendable.

The 42-year-old male donor suffered serious injuries in a road accident and was declared brain dead despite best efforts at Global Hospital in Mumbai. The family members of the patient were given informed counseling about organ donation before they agreed. The live heart was then airlifted at 03:15 PM from Mumbai to reach 05:05 PM at Delhi airport. Another green corridor from the Delhi airport to FEHI at Okhla was created that covered 23 kilometers in 23 minutes.

The 53-year-old female recipient is suffering from Dilated Cardiomyopathy that required a heart transplant. She was undergoing treatment under Dr Z S Meharwal at FEHI and was put on the waiting list. There is a team of almost 40 people under the “Advanced Heart Failure” program who work on the protocol from heart retrieval to heart transplant.

Speaking on the condition of the patient, Dr Z S Meharwal said, “A heart transplant is a critical surgery where time is of essence. It is commendable that a live heart was retrieved and transported within such a short span of time. We remain indebted to the family of the donor who in this hour of grief and loss decided to save and enrich other’s lives. Organ donation, as a cause, is yet to take off majorly but such examples of swift coordination gives us immense confidence. There is a need to increase awareness about this noble cause of organ donation.”
Dr Kousar Ali Shah, Zonal Director, FEHI, said, “We have come a long way since our first heart transplant at FEHI that took place in January 2015. We are humbled by the actions of the donor family. Despite their grief, they have selflessly donated their loved one’s organs, saving so many lives. We are also indebted to the support we receive from NOTTO, our clinicians and nursing staff, the police and traffic authorities – all who play an imperative role in making each transplant a reality.”
Only 720 Cadaveric donations (from a deceased donor) took place last year in our country which represents 0.8 person/ million individuals. In a nation of over a billion people, that’s not even 1 donor in a million. In comparison, while we are at a fraction of 1%, western nations like the United States are believed to have organ donor numbers in the range of 15 to 20%. Each year, half a million Indians die while waiting for an organ transplant, because no suitable donor can be found for them. That’s a life lost every minute! There is a need to spread the word that each one us has the potential to be an organ donor, and we all have the power to save 9 lives.