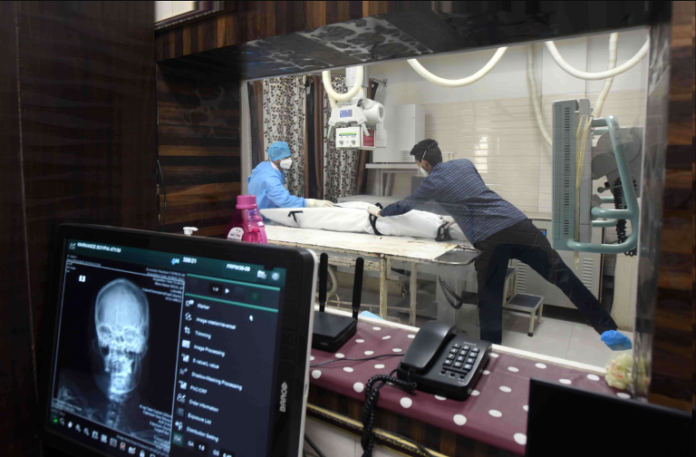 New Delhi: For a family that has lost someone to unnatural death, be it suicide or accident, the grief is compounded when they have to witness the dissected and sutured body after the autopsy. Postmortem examination is an integral part of medicine, which involves dissecting the body from top to bottom.

To avoid this, All India Institute of Medical Sciences has decided to conduct virtual autopsy, wherever possible. The facility would be inaugurated by Dr Balram Bhargava, director general of Indian Council of Medical Research (ICMR), on Saturday.

Virtual autopsy, as the term suggests, involves examining the internal organs, tissues and bones without touching the body. Under this process, the body is packed in a bag and put in a CT scan machine. Within seconds, thousands of images of the internal organs are captured, which can be analysed by forensic experts.

Dr Sudhir Gupta, professor and head of forensic medicine department at AIIMS, said they would be the first medical institution in south and southeast Asia to have this facility. Developed countries like Switzerland, the US and the UK have already adopted imaging technology to conduct autopsy in select cases.

AIIMS gets close to 3,000 cases for postmortem examination every year. Dr Gupta said 30% to 50% of these cases do not require dissection. “These include deaths caused due to accident, hanging or suicide. In many cases, there is no need to cut open the body to establish the cause of death. A virtual autopsy will suffice,” he added.

In police investigation, autopsy is an important part in case of an unnatural death. It takes anywhere between 30 minutes and three days, depending on the complexity of the case and availability of experts to conduct the procedure. However, virtual autopsy can be conducted within minutes. “This will save us time and manpower both,” said Dr Abhishek Yadav, associate professor of forensic medicine at AIIMS.

In 2019, Union health minister Harsh Vardhan had, while describing the initiative by AIIMS and ICMR to set up a virtual autopsy lab, expressed the government’s interest in developing multiple centres of this kind across the country to uphold the concept of dignified management of the dead.

In a virtual autopsy, the deceased’s records are available in digital format, which permits additional analysis by other forensic pathologists and second or third opinion even after years if some allegations crop up in the future.