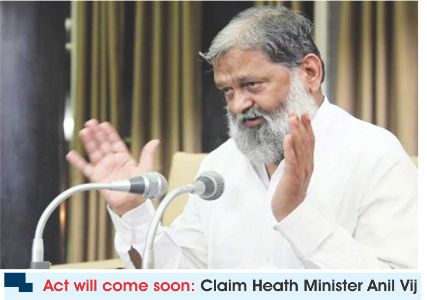 GURUGRAM : Haryana Govt. is spending millions on propagation of teachings of Bhagwadgita which says that   we must stand and fight resolutely for the righteous cause without worrying about the end result. But this does not hold true with its actions in implementing provisions of Clinical Establishment Act (Registration and Regulations).

An Act passed by Parliament of India if passed in Haryana also, will empower it to take action against those private hospitals, nursing homes, diagnostic centres and others providing health services who are found negligent in their treatment.. Undoubtedly it will give relief to thousands of poor patients who suffer at the hands of these hospitals, This is also duty of an   elected Govt., whose aim should be the service of its people. But powerful lobby of private hospitals is delaying the passing of Bill .

In absence of Bill ,the health authorities are helpless to take action against them even in cases of proven negligence. Instead of watching the interests of its people like a devoted king, following the teachings of Bhagwadgita. Haryana Govt. is worried about the interests of powrfull owners of clinical establishments. Clinical Establishment Act was passed long time back by Parliament with a view to regulate all clinical establishments across the country.

The act requires all clinical establish-ments to register themselves with concerned State health authorities and provide a set of standard treatment guidelines for the common diseases and conditions. Clinical establishments have to follow certain norms. Since health is a State subject, hence Union Health Ministry had asked the State Governments to adopt the   law by passing resolutions in their State Assemblies. States were free to incorporate their own suggestions in the Act by taking all takeholders into the confidence. But the making of Bill in Haryana is being delayed on one pretext or the other reportedly under the pressure of powerful lobby of these establishments.

Website of Haryana Health Department says that comments of doctors have been invited,on the issue of Haryana Clinical Establishment (Registration and Regulation Act),2014,as rules made their under up to 15th January,2016.  Health Minister, Anil Vij is also seized of the sensitivity of the issue. Talking to Medicarenews,Vij, denied any sort of pressure adding that   Bill was ready and at any time it may be put up in State Assembly after getting clearance from the State Govt. Lobby of private clinical establishments is opposing the Act stating that it is too tough. Once Act is passed it will check the mushroom growth of clinical establishments. In absence of the Act, health authority cannot take action against the private clinical establishments even in case of proven negligence. Sufferers had to either approach the Consumer Courts or file criminal case with Police which is long process.

Once Haryana Clinical Establishment Act is passed then Haryana Govt. will constitute Committees at district level for smooth implementation and for monitoring of its various provisions. Such Committees have already been formed at District Level for the implementation of P.N.D.T, Act.. Presently private health establishments cheat the poor patients by exaggerating the diseases and recommending unnecessary tests just to earn money. Besides a large number of private hospitals even did not have qualified staff to treat the patient’s.