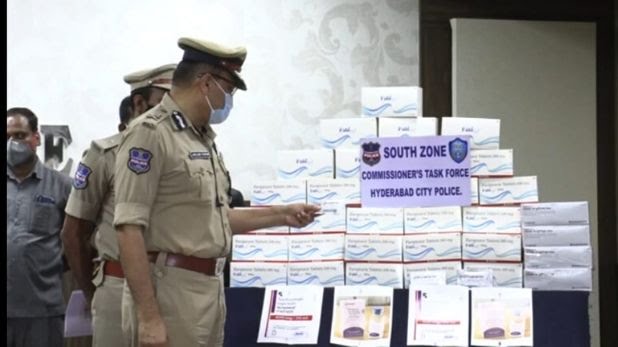 HYDERABAD: A Pharma firm MD and 7 othersin Hyderabad who were Black-marketing the covid-19 drugs were arrested by the Task Force. A chain of middlemen was used by the gang to supply drugs to patients.

A drug, Tocilizumab, was also procured through Gagan Khurana (21), a Delhi- based supplier. Whatsapp platform was used by the gang and the business was running from past one month. The gang also accepted cash and UPI payment. “Drugs worth Rs 35 were seized from their possession”, according to Hyderabad Police Commissioner Anjani Kumar.
Police further said that, “K Venkata Subramanyam used to sold the drug first to Santosh Kumar. Afterwards, it changed many people till it reached the client. A margin of around Rs 4,000 were kept by each person. Inquiries also revealed that Remdesivir is available at Rs 5,400 per unit, but the gang members used to sale it for around Rs 40,000 and Tocilizumab which costs Rs 40,000 per unit, was being sold for more than Rs 1 lakh.

These drug is used to treat Covid-19 patients who are in the ventilator stage. Several patients who purchased the drug from the gang have been recovered. who Supplier of Tocilizumab to Phani, Gagan Khurana flew away to the city to deliver the medicines when he was arrested. Police officials are further investigating whether the gang supplied drugs in neighboring states as well.