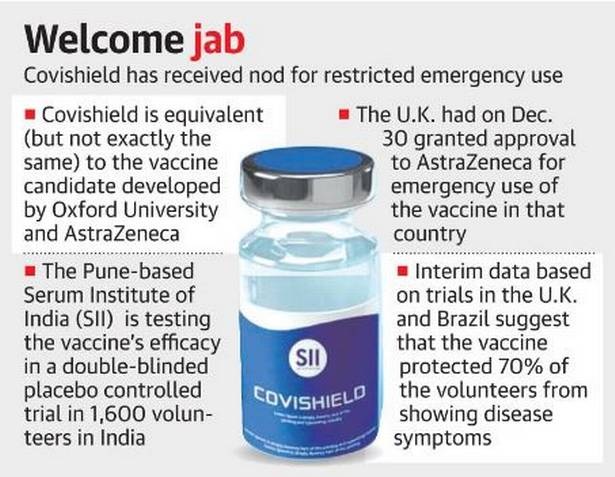 New Delhi : Covishield, the vaccine candidate from Pune-based Serum Institute of India, was approved by a Subject Expert Committee (SEC) of the Drug Controller General of India (DCGI) late on Friday. Bharat Biotech has been asked to furnish more data demonstrating the efficacy of its candidate, Covaxin, an informed source confirmed to The Hindu.

The nod for Covishield came at the end of a marathon meeting of the SEC which began in the morning and went on till late in the evening. The SEC gives its recommendation to the DCGI which is the approving authority for drugs and vaccines.

“Covishield is likely to be practically available for use within the next week,” the source said. “Similar to that in the United Kingdom, we’ve approved the vaccine to be given in two doses 4-12 weeks apart.”

Covishield, which is similar to the ‘Oxford vaccine’ developed by the Oxford University vaccine group and marketed by AstraZeneca, was approved by the health regulator in the UK under emergency use conditions on Thursday. Under this the company is allowed to deploy its vaccines to priority groups and then the larger public, even though a full safety assessment hasn’t been completed.

For Covishield’s appraisal, the source said, the nod by the UK regulator and data from a phase 2 trial on 100 volunteers in India, antibody levels generated in the volunteers in response to the vaccine, and safety data from phase-1 studies were relied onto accord emergency use approval.

In the UK, the vaccine has been recommended to be given in two doses 4-12 weeks apart. This, even though the vaccine’s performance was evaluated in volunteers who were given doses four weeks apart and there’s still no clarity on how long the protective effect of a single first dose lasts. The UK regulator allowed this after a spike in cases in recent weeks and decided to ensure that maximum people get at least one dose of a vaccine.

SII officials have said India will have a stockpile of 100 million doses as of the first week of January but there is no clarity on how many of these will be available for Indians. A longer dosage interval means that potentially more Indians could get at least a single jab of the vaccine.

Covishield is currently being tested in 1,600 volunteers as part of its phase 2/3 trial. However the results from these trials haven’t been published or publicised in scientific journals.

“The phase 3 trial is ongoing and we will continuously keep reviewing the data,” the person added. “Other than the case from Chennai of a reported severe adverse event from the vaccine, no other safety events have been reported. We’ve also conclusively ruled out that the said reaction was directly linked to the vaccine.”

The preliminary efficacy data from India seemed to suggest that it was “similar to” what was seen in the UK and Brazil which formed the bulk of the data set that the UK relied onto accord approval.

The Health Ministry was yet to comment on the approval accorded but a set of conditions under which the approval was accorded is likely to be spelt out on Saturday.

This is the second time in three days that the committee has met to review applications for emergency use approval by SII, BB and Pfizer India. The latter has reportedly sought more time, but the company’s m-RNA vaccine has already been approved, under emergency use conditions, in the United States, United Kingdom and pre-qualified by the World Health Organisation.

Expectations that one of the vaccine candidates would be cleared soon rose on Thursday after DCGI chief, V.G. Somani, indicated that a “New Year gift” was in the offing.