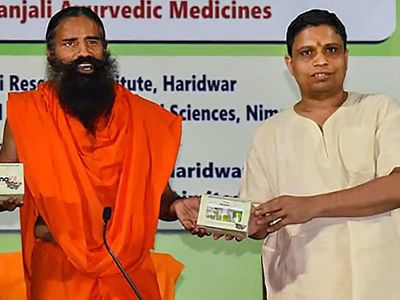 Dehradun : Yoga guru Ramdev’s close associate and Patanjali Ayurved CEO Acharya Balkrishna on Thursday said that “all those who are pointing fingers at Ayurveda should know that the newly-launched 2DG drug of DRDO also has its origins in Ayurveda and in research done by Patanjali.” “We at Patanjali have done a lot of work on Covid in the past few months and research on the compound used in the 2DG drug was first done by our scientists. We have had 10 papers regarding Covid published in international journals while 15 more are in pipeline,” he added.

Reacting to allegations made by the Indian Medical Association (IMA) that Ramdev had turned antagonistic towards IMA as well as allopathy after the doctors’ national body sought information under RTI about Patanjali’s Divya Swasari Coronil Kit in February this year, questioning its efficacy, Balkrishna said that Patanjali had cleared all the necessary scientific and administrative requirements before launching its drug. “Ever since Patanjali came up with Coronil, there had been repetitive attempts by allopathy doctors to suppress our medicines even though we have earned our licence to manufacture this drug only after submission of relevant evidences and clinical data to all the stakeholders.” He added that he is extending an invitation to allopathy doctors, scientists and other experts to have an open discussion on the subject with Patanjali’s team of scientists and Ayurveda doctors at a time and place of their choice.

“Science is science. Just because the work has been done by someone who professes faith in Indian culture and tradition and is clad in an ascetic’s clothes, it cannot be denied or underestimated. If anyone feels that we are wrong, we are open to discuss and debate on our research works.”

Conveying gratitude towards doctors who laid down their lives in the line of duty while treating Covid patients, Balkrishna said, “We are thankful to each and every doctor — irrespective of whichever treatment modality they practice— who worked towards saving human lives during this crisis.”

On questions being raised on how Ramdev can comment on treatment modalities even though he doesn’t hold any medical degree including in Ayurveda, Balkrishna said, “His work defines who he is and that is the best answer for those who are questioning his credentials. He has pioneered an organisation that has around 500 top-level scientists doing research on diseases and their cures. Today, Patanjali is giving free consultation across its 2500 clinics and has cured over 5 crore patients. All this has been done under the vision and guidance of Swami Ramdev.”