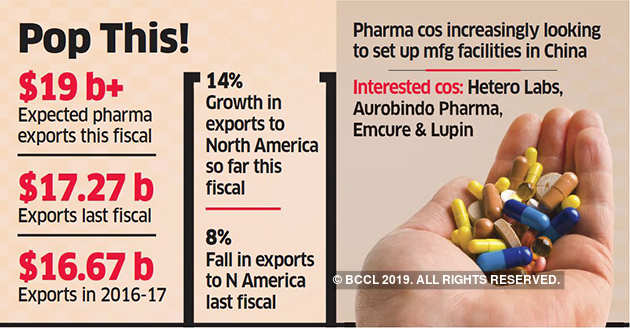 HYDERABAD: Increasing price pressures in the North American market, which accounts for nearly a third of India’s pharmaceutical exports, is prompting domestic drug makers to explore avenues in new markets like China and Japan, apart from the amplified focus on reviving markets like Africa, CIS, and Europe.

With no significant headwinds like import alerts from the US market, Indian commerce ministry officials expect the country’s pharmaceutical exports to record at least $19 billion this fiscal, up from $17.27 billion last fiscal when Indian exports jumped 2.92% from $16.67 billion in 2016-17.

“The projections on positive growth in overall pharma exports this fiscal are also backed by around 14% growth in exports to the North American market so far compared to around 8% fall last fiscal,” Uday Bhaskar told ET. “It was for the first time in the Indian pharmaceutical industry that the overall pharma exports grew last fiscal despite a fall in value of exports to the US market due to price erosion.”

Africa, Europe and CIS markets, the most important markets after the US market for Indian pharma exports, have revived, he said.
Drug companies turn to China, Japan after pricing pressure in west

Indian drug firms are also increasingly looking to set up manufacturing facilities in China. Some of these include Hetero Labs, Aurobindo Pharma, Emcure and Lupin among others.

“India is asking Chinese regulators to reduce the timelines for product registrations in the Chinese market for Indian drug makers, at least for critical life-saving drugs. Pharmexcil has signed a memorandum of understanding with the Chamber of Commerce for import & export of medicines and health products in China for greater market access, apart from representing the issues being faced by the Indian drug makers,” he said.

To save on forex outgoes, Indian regulators are firming up detailed project reports on key active pharmaceutical ingredients (APIs), key starting material (KSMs) and intermediates required to be developed indigenously.

“Pharmexcil, with the support from the commerce ministry, has formed a think tank and brought CSIR labs and industry on one platform for devising strategies to reduce the dependence on China and to make India self-sufficient by developing technologies to manufacture those APIs, KSMs and intermediates indigenously,” said Bhaskar, adding “it should also help India improve the export potential in APIs.”

The Indian pharma companies are faced price pressures as Chinese raw materials makers were escalating prices owing to mounting costs there and the Indian drug makers were unable to pass it on to the global buyers who were increasingly looking to slash procurements prices to contain healthcare costs. Further, increased inspections by the global regulators and customers also increased cost of compliance, adding further pressure on margins of domestic drug makers.