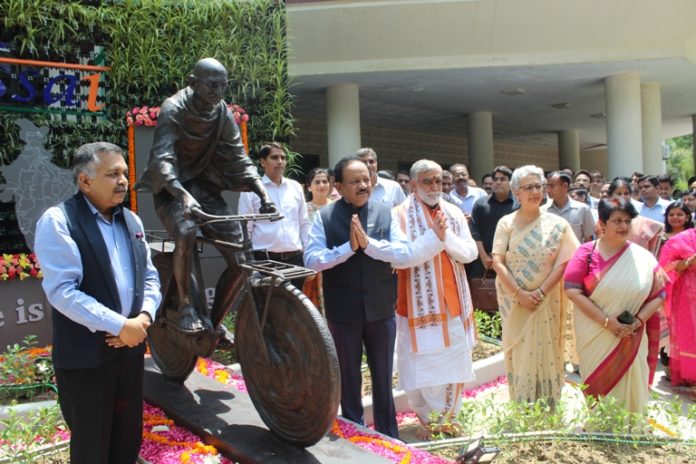 New Delhi: Food Safety and Standards Authority of India (FSSAI), the food regulator, tasted all round admiration for making food safety its business and everyone else’s business in its first World Food Safety Day Celebration (June 7). The food regulator showcased its food safety regime and armamentarium to ensure eat right ecosystem in the country.

Right from Prime Minister Narendra Modi to Union Minister of Health and Family Welfare Dr Harshvardhan and other dignitaries showered praise on the food regulator for its efforts in the last one year for eat right movement in the country. An innovative solution to take food safety to schools, called the ‘Food Safety Magic Box’ was launched. This do-it-yourself food testing kit comprises a manual and equipment to check for food adulterants, which schoolchildren can use in their classroom laboratories. 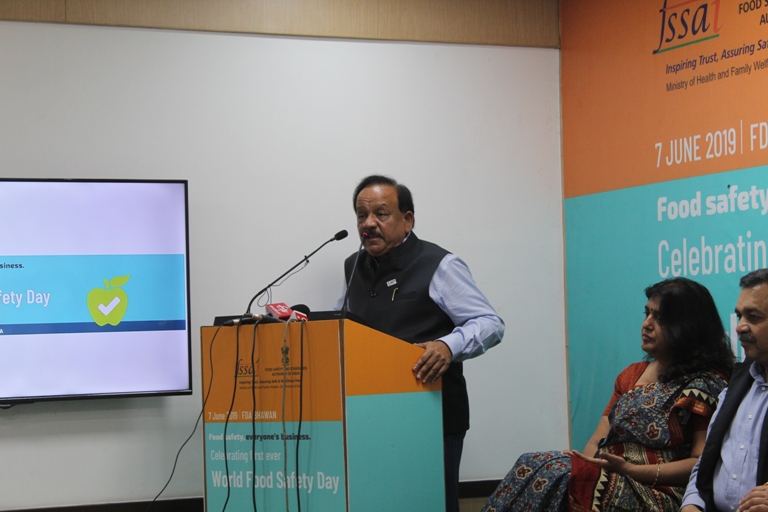 The World Food Safety Day, declared by the United Nations General Assembly in December 2018, was kicked-off by Union Minister, Dr. Harsh Vardhan and Minister of State, Ashwini Kumar Choubey, Ministry of Health and Family Welfare at the Food Safety and Standards Authority of India (FSSAI). In the function remarkable efforts of States, Food Businesses and individuals were also recognized in promoting food safety. The theme for this day was ‘Food Safety, everyone’s business. A wide cross section of stakeholders ranging from professionals to Government food safety officials, Development Partners, food business operators collectively took a pledge to promote food safety for all and sundry in the country.

The Prime Minister, in his message recognized that “Food safety is of prime importance for the well-being and health of our nation as well as its people, particularly women and children. The Government is focused on implementing the latest and best standards of food safety in the country.”In an effort to galvanize states to work towards ensuring safe food for citizens, FSSAI has developed the first State Food Safety Index (SFSI) to measure the performance of States on five parameters of food safety.

Dr Harshvardhan felicitated seven leading States/UTs based on the ranking for the year 2018-2019for their impressive performance. These were Chandigarh, Goa, Gujarat, Kerala, Madhya Pradesh, Maharashtra and Tamil Nadu. The categories included Human Resources and Institutional Arrangements, Compliance, Food Testing- Infrastructure and Surveillance, Training and Capacity Building and Consumer Empowerment. States such asBihar, Delhi, Jammu and Kashmir, Punjab and Uttar Pradeshfollowed close behind.

To recognize efforts at the community level to promote food safety, FSSAI also declared seven campuses such as those of universities, schools, colleges/institutes, workplaces, defence/paramilitary establishments, hospitals and jails as ‘Eat Right Campus’. Based on a five star-rating by compliance to a set of well-defined benchmarks on food safety and hygiene, food waste management, healthy diets, promotion of local/seasonal food and awareness generation, the following campuses were recognized for their exemplary standards-IIT Gandhinagar, IIT Roorkie, LBSNAA, Mussourie, Unilever, Bengaluru, Wipro, Bengaluru, HCL Noida and Genpact, Gurugram.

FSSAI has instituted the‘Eat Right Awards’ to recognize the contribution of food companies and individuals to empower citizens to choose safe and healthy food options, which would help improve their health and well-being. The Expert Selection Committee, shortlisted 13 awards out of a total of 123 applications in five categories, namely, Food Products, Food Services, Organized Retail, Innovative Solutions, Safe Food including Testing, andCommunity outreach and Engagement. Out of a total of 83 applications, 14 awards were given for individual contribution made by young chefs, professionals and media influencers.

Twenty kits were distributed to Primary Health Centres and Government schools in Delhi with the support of the Delhi Food Safety Department.
Another new-age, hand-held battery operated device called ‘Raman 1.0’ from Oak Analytics, India was also launched. This device performs rapid detection (in less than 1 minute) of economically driven adulteration in edible oils, fats and ghee. The equipment tests more than 250 samples per battery charge, collects and stores data on the cloud using a smart device.This is the first of 19 such equipment and methods that have been provisionally approved by FSSAI for strengthening the food testing infrastructure in the country.

To commemorate 150 years of the Mahatma’s 150th birth anniversary, FSSAI had launched the ‘Swasth Bharat Yatra’ on 16th October 2018, World Food Day to spread the message of‘Eat Right India’. This pan-India cyclothon, the world’s largest for a public health cause, culminated in New Delhi on 27th January 2019.In over 100 days, more than 21,000 volunteer cyclists and 10 lakh participants covered over 20,000 kms, reached over 2100 places and touched the lives of 2.5 crore people, creating awareness on safe & healthy diets.

Gandhiji was the inspiration for the Swasth Bharat Yatra thanks to his non-violent ‘Satyagraha’ to mobilize people for a common goal. His philosophy on food and health is relevant even today. He advocated a simple, whole-foods, plant-based diet, regular fasting and physical exercise for health benefits. To symbolize the ongoing journey towards good health, a statue of ‘Gandhiji on a Bicycle’, the first of its kind, was also unveiled by Ministers.

FSSAI’s online Web-resource Library was also launched. This library hosts informative and interesting videos on topics such as food adulteration, eating a balanced diet, fortified foods etc. This can be accessed at www.fssai.gov.in/videolibrary.

Speaking on the occasion, Dr. Harsh Vardhan said, “I appeal to all people to adopt Gandhiji’s messages of eating less, safe, healthy, simply, locally and sustainably by reducing food waste and sharing surplus food. While FSSAI has done great work, it needs to be used optimally and turned into a Jan Andolan.”

Pawan Aggarwal, The CEO, FSSAI said “FSSAI is a very different kind of organization compared to food regulators across the world. First, we have brought food safety and nutrition together in the national health agenda. Second, we focus on consumer empowerment. Third, we work through partnerships and convergence.”