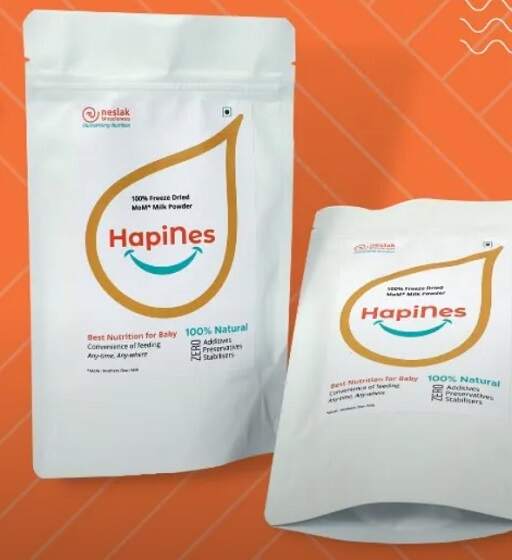 MUMBAI : The Govt has suspended the licence of Punjab-based health-tech start-up Neslak Biosciences for processing and commercialisation of mother’s milk. The company’s licence for ‘HapiNes’, which is breast milk freeze dried into ready-to-use powder, was suspended by the Union Health Ministry on October 7, for violation of the Food Safety and Standards Act 2006, documents accessed by TOI say.

Significantly, the Food Safety and Standards Authority of India (FSSAI) has sent out an advisory to the state food commissioners, regional directors as well as central licensing authorities, saying processing and sale of human milk is not permitted under the Food Safety and Standards Act 2006. Observing that manufacturing and marketing of mother’s milk and /or products derived from mothers’ milk have been under scrutiny for a while, it said that some food business operators had been wrongly obtaining licenses under `dairy’ or other products. On the contrary, they are producing human-milk based products.

Taking cognisance of a complaint filed last month by Breastfeeding Promotion Network of India (BPNI), an NGO which promotes and supports breast feeding, the health ministry took swift action against the company.

Efforts to contact Neslak proved futile till the time of going to press.

The company’s website describes it as a `health-tech start-up which is providing a comprehensive solution to every situation concerning human milk’. The MRP is understood to be Rs 6000 for one litre of mother’s milk.

Further, BPNI was recently alerted to the fact that Neslak Biosciences, was promoting the sale of ‘HapiNes sachets’ to doctors, which is prohibited under The Infant Milk Substitutes Feeding Bottles, and Infant Foods (Regulation of Production, Supply and Distribution) Act 1992, and Amendment Act 2003, the NGO’s central coordinator, Dr Arun Gupta told TOI.

A message sent out by the company to pediatricians said “..HapiNes is a service for mothers to transform their own milk into easy-to-use and store powder form. HapiNes helps mothers overcome breaches in breastfeeding, in situations such as rejoining work, night-time feeding, travelling or when mother is sick.”

The message amounts to promotion of `infant milk substitute’, banned under Section 3 of IMS Act. Hence it was in violation of the IMS Act, in addition to the commercialization of mother’s milk, he added.

Over the last few months, there have been several complaints of companies processing and marketing breast milk under FSSAI licences. In another example, last month the Ministry of Ayush barred Neolacta Life Sciences, a subsidiary of the UK-based company, from manufacturing products derived from breast milk, under the garb of Ayurveda and cancelled its licence. The company has reportedly gone to court.

It may be pointed out that according to the national guidelines on Lactation Management Centre in public health facilities, donor human milk cannot be used for any commercial purpose, Minister of State for Health, Bharati P Pawar told Lok Sabha in July this year. Donation of human milk is to be done freely and voluntarily and is recommended only for pre-term or sick babies whose mothers are unable to breastfeed them.