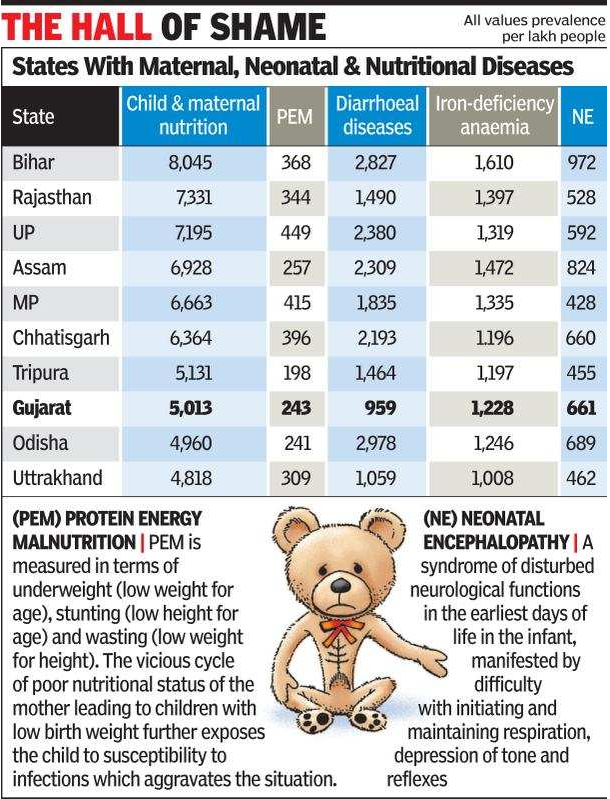 AHMEDABAD: Back in March 2016, the Unicef Rapid Survey on Children covering India had warned Gujarat that around 10.1% children in the state were grossly underweight and 41.6% showed stunted growth.

Gujarat 8th worse in child, maternal nutrition Now, the latest Lancet Global Health report on the burden of diseases in Indian states says that Gujarat ranked eighth on the parameter of health problems pertaining to child and maternal nutrition, with 5,013 individuals per lakh population suffering.

Yet, between 2016 and 2018, the women and child development department of the state government slashed its budget allocation from Rs 62.13 crore to Rs 38.51 crore!

The Lancet report points that the prevalence of iron deficiency among women and children in Gujarat is higher than that of Bihar, Rajasthan, UP, and Uttarakhand.

In the case of protein energy malnutrition, the prevalence is 243 cases per lakh population, while in the case of neonatal encephalopathy, which is again related to malnutrition, Gujarat has 661 children suffering in every lakh of newborns.

Gujarat is ahead of states like MP, Chhattisgarh, Rajasthan, and UP when it comes to the prevalence of neonatal encephalopathy.

The Lancet study is a revelation that underscores how malnutrition continues to plague Gujarat, which is scoring double-digit growth.