One lakh fifty thousand (150,000) Salma food packets came as a manna from Jannat (heaven) to starving people in Somaliland. Dr. Azad Moopen, the benign NRI health honcho in Dubai, has taken it upon himself to reach out to humans wherever they are in distress. ‘Aster @30’ is creating benchmark in philanthropy which is quite in keeping with the declaration of 2017 as the ‘Year of Giving’ by UAE President, His Highness, Sheikh Khalifa bin Zayed Al Nahyan.

Ever Since May when Aster DM Healthcare launched its Volunteers Program in Delhi to aggregate humanity for sick and dying, its Foundation has been leaving no stone unturned to reach out to stranded people wherever they are. The largesse for Somalia is part of that avowed endeavour. Compassion has ever been the article of faith with Aster DM Healthcare. In India too, its endeavour is making marks among people.

Aster Volunteers joined hands with Al-Hayat Foundation humanitarian workers in Somalia, to support the ongoing relief efforts and aid in the safe distribution of over 150,000 meal packets to the famine affected and the displaced Somalis at Buraco in Somaliland, in presence of their regional Vice Governor Mr. Mohammed Hayd.

Commenting on the initiative Dr. Azad Moopen, Founder Chairman & Managing Director of Aster DM Healthcare, a leading private healthcare provider in the Middle East and  India, said, ‘As of June 2017, around 3 million people, an estimated one quarter of Somalia’s population, are experiencing acute food shortages at crisis or emergency levels and 363,000 children are suffering from malnutrition. ‘Aster’ aspires to be responsible members of the international community to think about others, and to do what we can to alleviate the suffering of those in less fortunate conditions than we are. The people of Somalia have long struggled with both violence and scarcity, and it is our honor and our duty at Aster DM Healthcare to assist in any way we can’. 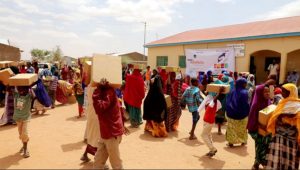 Dr. Moopen said further,“The Aster@30 initiative and the ‘Aster Volunteer’ programme are testimony to our effort to empower individuals who want to make a positive difference in the society and extend a helping hand to the less fortunate. I ask anyone who is willing and able to join us going forward so we can assist in the healing of others. We feel very happy and proud the food dispatched from Dubai soon after Ramadan days could be distributed among the famine-affected people at Buraco, just prior to Eid Al Adha celebrations”.

“We are incredibly proud of the Six Aster Volunteers, who have traveled from Dubai to Somalia in order to support the distribution, going above and beyond to do something positive for those in need,” added Dr. Azad Moopen.

The initiative is part of the ‘Aster Volunteer’ global programme for Africa for the disaster supports as part of “Aster@30” initiatives commemorating Aster DM Healthcare’s 30th anniversary year. Aster partnered with Government of Dubai’s Awqaf & Minors Affairs Foundation (AMAF) earlier this year as part of Aster’s ongoing Give Back Initiative (GBI), to provide humanitarian aid and support the relief efforts in famine affected areas of Somalia, channelled through its ‘Aster Volunteers’ program. The foods packed through Salma Humanitarian Relief Program, is an initiative pioneered by the Dubai Islamic Economy Development Centre and managed by AMAF, ensured safe delivery and efficient distribution of the food packets. The distribution was supported by Six Aster Volunteers, who travelled to the East African country Somalia, and the ground handling organized by Al Hayat Islamic Foundation – a NGO in Somalia that Aster has partnered through and AMAF and its associate Dubai Charity Association (DCA).

The assigned Volunteers left Dubai on Friday 25th August ’17 early morning, arrived in “Hargeisa” the capital of the Somaliland. About Aed.1.5 Million worth food packets despatched in 2 shipping containers of 20 foot each during Ramadan were arrived in “Buraco”, and was safely taken to various stocking and distributions sites in and around Buraco, where the large number of famine affected displayed communities are being migrated. Food was distributed among 3,500 families packed in a large box with 42 food packets.

Mr. Abdul Hakeem Saed Bare, Chairman of Al Hayat Islamic Foundation, said, “We are very pleased to receive such great support and commitment from our partners and friends in Dubai.”

The Salma Humanitarian Relief Program endeavours to provide humanitarian initiatives aimed at combating poverty in parts of the world, where access to basic needs is scarce. The aid to Somalia’s victims of famine is part of an ongoing effort on the part of Aster to alleviate the suffering of those in unfortunate conditions across the Middle East, Africa and Asia. In addition to its activity in Somalia, Aster DM Healthcare is also providing medical support to the Syrian Refugees settled in Refugee Camps in Al Zaatari, Al Azraq and Erbid in Jordan.