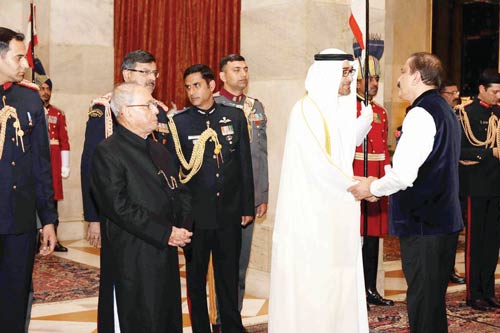 NRI UAE health honcho Dr. Moopen advocates ease of health visa
New Delhi: As Dubai’s iconic Burj Khalifa got draped in Indian tricolour, India and UAE may also merge as a seamless ‘Healthcare Republic’. The Visit of HH Sheikh Mohammed Bin Zayed Al Nahyan, Crown Prince of Abu Dhabi as Republic day chief guest, augurs windfall for India’s health tourism industry provided steps are taken to ‘bridge the gulf’ between the patients of UAE and Indian world class hospitals. As experts say, Ayurveda, Yoga, Unani, Siddha &Homeo may also become hot cake in UAE countries if patient friendly policies are adopted by India.
Unprecedented show of solidarity between two nations has floated the hope that Indian health tourism may get an extraordinary boost in times to come. If republic day bonding matures into a lasting friendship, experts say, it would a win-win situation for both UAE patients and Indian healthcare industry, which has the entire wherewithal to provide them world class treatment at a much cheaper cost.
In cementing bond between India and UAE, the benign NRI (Keralite) Dubai healthcare honcho and Chairman and Managing Director, Aster DM Healthcare, Padma Shree Dr. Azad Moopen has emerged as a vital link. Aster DM is a healthcare major in UAE and has recently expanded big time in India with many world class hospitals in metro cities.
As one of the important members of the high powered business delegation to India with Abu Dhabi’s Crwon Prince, Dr. Moopen is expectantly looking at this new found cozying up of the two sides. This delegation also met Prime Minister Narendra Modi to put across their views to cement bilateral trade including healthcare. According to Dr. Azad, an open sky policy would give wings to healthcare tourism between them.
In a missive to Medicare News, Dr. Moopen said, ‘there is significant scope for development of Health Tourism potential of India, especially with GCC (Gulf Cooperation Council) countries. India had been traditionally the destination for treatment for many GCC countries. Bombay, Meerut, and Hyderabad et al used to be first place of choice for most in UAE earlier. Unfortunately, this has come down significantly in the last 25 years and many of them travel to Western countries or the Far East countries nowadays. He further says, ‘This can be reversed by adopting proper policies and protocols.’

When he was awarded Padma Shri in 2011, in an emotional thanksgiving, he promised 20 percent of his wealth, which amounts to astrological sum, for Indian Patients. Ever since he made that promise, his Aster DM healthcare is leaving no stone unturned to replicate its UAE fame altruism in India too.
He has recommended following steps to augment health tourism between UAE and India—
1.    Promote India as a destination for quality healthcare at affordable cost.
2.    Ease the health visa issuance on arrival or in the country of origin through e Visa.
3.    Highlight the capabilities of the Indian doctors and showcase the safety and quality attained through showcasing JCI and NABH accreditations.
4.    Highlight the cost advantage of treatment in India where we can offer most advanced and special treatments at 1/3rd to 1/5th of the cost in Far East and Western countries.
5.    Highlight India as a destination for Holistic Healthcare through all the embassies and Consulates through AYUSH – Ayurveda, Yoga, Unani, Siddha&Homeo. This will have very good acceptance in GCC.
Further commenting on the relationship between UAE and India, Dr Moopen, said, ‘The relationship between both countries is transformational as it expands collaboration in several areas beyond the traditional areas like oil and diaspora working conditions. This will help unlock the potential to increase trade significantly. Both the countries have complementary strengths that could be leveraged effectively.  It is the right time to start an open sky policy between UAE and India which already has nearly 1000 weekly flights between many destinations. Freeing this up by open sky policy will increases the number of flights and thus reduce the cost of travel especially for the migrant population significantly. I also suggest the bold step to look at the possibility of association of UAE in the management of Air India to improve its efficiency and profitability. With the hugely successful international carriers like Emirates and Ethihad having its home in UAE, this will be a win- win situation for everyone.’
With this visit of HH Sheikh Mohammed bin Zayed Al Nahyan – Crown Prince of Abu Dhabi and Deputy Supreme Commander of the UAE Armed Forces on the occasion of India’s 68th Republic Day ceremony, I expect the bilateral relations between the two countries to touch greater heights. I wish all Indians across the globe a memorable Republic Day’