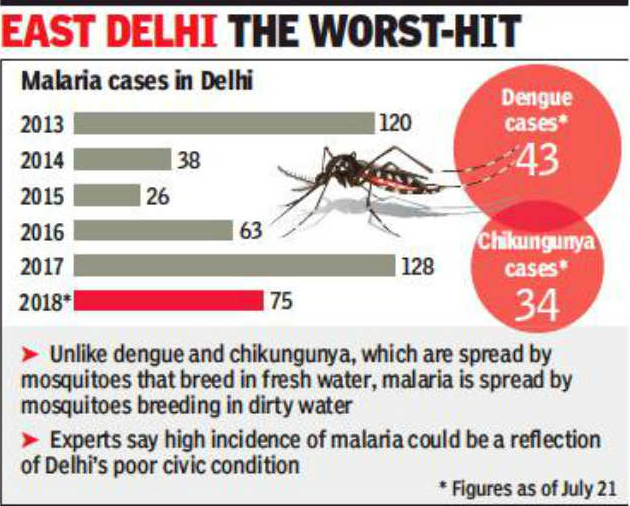 NEW DELHI: Malaria is turning out to be the fastest spreading mosquito-borne disease this season.

As per municipal data released on Monday, 75 people have been affected by malaria as on July 21 this year. It is higher than the number of people affected by dengue (43) and chikungunya (34), the two other mosquito-borne diseases, in the said period.
Malaria cases outpace dengue this season
Among the cases traced by authorities concerned, a maximum of 13 malaria patients resided in the jurisdiction of east corporation, followed by south corporation (7), north corporation (5), NDMC (3) and Delhi Cantonment (3). “Total 44 cases remained untraced after investigation,” the officials said. Last year also, Delhi reported high incidence of malaria with 577 cases.

The doctors said the corporation’s data on incidence of malaria and deaths due to it does not give the complete picture. “The corporations report only those cases that are treated in its sentinel hospitals or big private hospitals that send them case reports. Hundreds of patients with febrile illnesses who get treated at smaller nursing homes or standalone clinics aren’t included in the data,” said a senior doctor working with National Vector Borne Disease Control Programme (NVBDCP).

He added that malaria cases, which were once considered on the wane, have shown significant resurgence across southeast Asia, Africa and South Africa, among others. “It is mainly on account of reduced focus and expenditure by the governments,” he said.

While dengue and chikungunya viruses are spread by Aedes aegypti mosquito that breeds in fresh water, malaria is spread by the anopheles mosquito that can breed in dirty water. Dr D K Seth, principal consultant at Hindu Rao Hospital, said high incidence of malaria may be reflective of poor sanitation levels. “We need to renew our focus on the disease with an aim eradicate it at the source and thus reduce its spread,” he said.

Symptoms of malaria include fever, headache, chills and vomiting, and usually appear 10 to 15 days after the mosquito bite. “If untreated within 24 hours, malaria can lead to severe illness, and even result in death. In many parts of the world, the parasites have developed resistance to a number of malaria medicines,” the WHO said. The municipal health officials said dengue and chikungunya cases may also soar in the coming months.