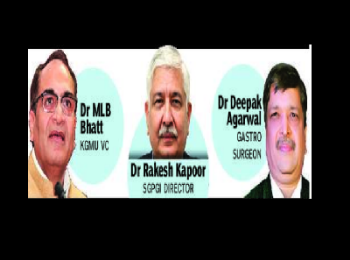 LUCKNOW: In three cheers for the medical fraternity of Lucknow, three eminent doctors of the city were conferred the prestigious BC Roy Award on Friday While SGPGI director Prof Rakesh Kapoor and KGMU vice-chancellor Prof MLB Bhatt have been awarded in the ‘eminent medical teacher’ category, Dr Deepak Agarwal, gasteroenterologist, has been awarded for his contribution in the field of gastroentrology in the category ‘to recognise the best talents in development of specialities in different branches in medicine’, stated a press release from the Medical Council of India.

Speaking to TOI, Prof Bhatt said, “I share this award with my teachers and students.” Prof Kapoor said it will encourage him to do more for his patients as well as students.

Prof Bhatt, who hails from Jaunpur, did his graduation from KGMU and joined the Indian Army’s medical corps under the Short Service Commission. He was part of Operation Meghdoot launched by the Indian Army in 1984 to capture the Siachen Glacier. Later, Prof Bhatt did his masters in radiotherapy and started teaching. He served as KGMU medical suprintendent in 2006-07. He was appointd the vicechancellor in 2017. In the area of medical research, Prof Bhatt is credited for developing original biomarkers for testing oral, breast, and urinary bladder cancers.

Prof Rakesh Kapoor, also an alumnus of KGMU, was the winner of the prestigious Hewett Medal in graduation. A gold medallist in masters in general surgery, Prof Kapoor joined SGPGI Chandigarh for superspeciality in urology. In 1988, he became a faculty at SGPGI Lucknow.

Prof Kapoor achieved many milestones in his career as a surgeon and teacher. He developed some unique techniques to address the urological problems in women. Vaginoplasty, wherein a vagina is created from a section of the small intestine to help woman born without ovaries and vagina lead a normal sexual life, is perhaps the most remarkable.

What is BC Roy Award?

BC Roy Award, considered the highest medical honour in the country, is given in five categories. The award to eminent medical teachers includes Rs 15,000 and a medal for each awardee. The selections are made by a managing committee appointed under the Medical Council of India. MCI also presents BC Roy Award in medical research, development of new branches of study, and outstanding work in socio-medical relief categories.