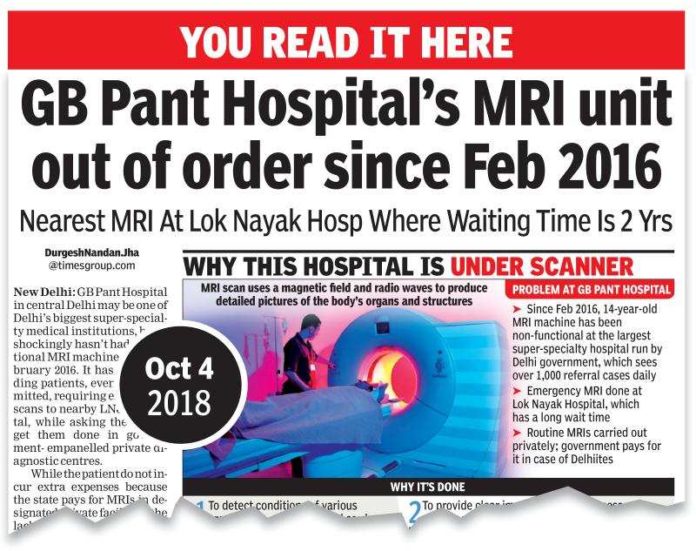 NEW DELHI: The National Human Rights Commission has issued notice to the chief secretary of Delhi and the Union health secretary over a TOI report dated October 4 that highlighted unavailability of MRI at G B Pant hospital since February 2016.

The government hospital is a referral centre for neurology, neurosurgery, gastroenterology, gastrointestinal surgery and psychiatry, for which MRI is a crucial test for diagnosis and timely treatment.

The commission has observed that the test’s unavailability, as reported, raises serious issue of violation of Right to Life and health of the people.

The NHRC, in a statement issued on Wednesday, said they have called for reports in the matter within four weeks including the present status of the basic facilities including MRI, CT scan, X-ray and pathology tests at the government run hospitals as well as steps taken to procure the new machines for the patients, without any further delay.
Doctors at G B Pant say 90% of the patients in the neurology and neurosurgery OPD require MRI tests to be done. Post-operative MRI is needed in 20% of neurosurgery cases to assess the outcome of surgery such as resection of tumour. In these cases, they either do a CT scan or wait for the patient to become stable enough, to be sent to LNJP Hospital for the test.

The urgent cases are scanned the same day or following day but, generally, the waiting time for an MRI test at the LNJP hospital is around two years and therefore most of the patients are referred to private centres and the government pays for the test.

Madhu Bala, a school teacher from Karawal Nagar who lost her nine-month-old foetus after admission for delivery to Guru Tegh Bahadur Hospital two years ago, recently filed a petition in Delhi high court regarding the poor condition of state-run hospitals. The unavailability of an MRI machine at GB Pant was also mentioned in her petition. In its reply to the court, the hospital admitted its MRI machine, having worked for 14 years, became non-functional in February 2016.

The hospital said that after the tender for the purchase of new 3T MRI was floated, the bids were evaluated and “the final recommendation of the technical committee has been submitted to Central Procurement Agency”.