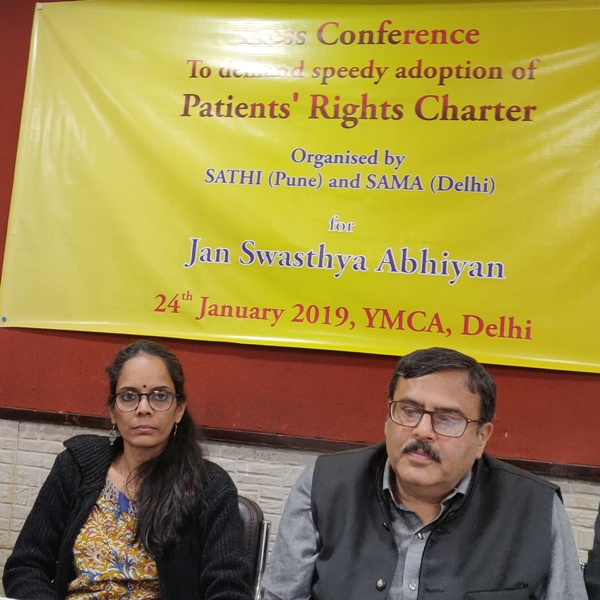 New Delh: We hear about the plight of patients by private hospitals off and on. But it is taking place daily all across the country with impunity. Millions of patients’ rights violations are occurring, which if documented, would constitute a veritable book of horror stories. Jan Swasthya Abhiyan has decided to document them to underline ruthless and unconscionable patients’ right violations.

Demanding immediate adoption of Patients’ Rights Charter by Union Health Ministry, Jan Swasthya Abhiyan and other Patients groups have threatened to blow it up as a major election issue if their demands remain unmet. In a press conference, they said the government needed to do this before unveiling Ayushman Bharat.

Underlining complete apathy of central and state governments towards the implementation of Patients’ Rights Charter, they insinuated that they are prevaricating under the influence of corporate hospitals lobby. This lobby is trying hard to get this charter diluted to perpetuate their ruthless profiteering.

Members of Jan Swasthya Abhiyan (JSA), a national platform working on health and healthcare services across the country, held a national consultation on 24th January 2019 at Delhi, where they deliberated on patients’ experiences and violations faced by them especially in private hospitals, and the pressing need to adopt the Charter of Patients’ Rights by the Union Health Ministry.

The consultation was followed by a press conference, which was organised by SATHI, Pune and Sama Resource Group for Women and Health on behalf of JSA, with participation from several patients’ rights groups and health activists from across India including states of Maharashtra, Tamil Nadu, Odisha, Uttar Pradesh, Haryana, Rajasthan and Delhi.

The consultation started with various participants sharing case studies regarding serious rights suffered by patients who sought care in private hospitals. A key issue discussed was the Charter of Patient’s Rights which has been developed by National Human Rights Commission. In August 2018, the Ministry of Health and Family Welfare announced its plans to implement this Charter, which was placed in the public domain for inviting comments up to 30th September 2018. Although nearly 4 months have elapsed since this declaration of intent, there seems to have been no further progress on finalisation and adoption of the charter.

They said the adoption of the charter is urgent to ensure that the many violations of patients’ rights are immediately addressed to stop loss of health and even lives. If the charter is not adopted before the Lok Sabha elections, then a large-scale campaign will be taken up by JSA to demand this as an electoral issue, they warned.

They said this charter will act as reference framework for the Union Government and State Governments to give complete protection to patients, while they set up operational mechanisms to make these rights functional and enforceable by law. This is especially important and an urgent need at the present juncture, because India lacks effective regulation ofthe private medical sector.It is also notable that while the present government is actively promoting ‘Pradhan Mantri Jan Arogya Yojana’ wherein over ten crore households would be supported to seek care in private hospitals, in addition to providing land free of cost in tier 2 and tier 3 cities, there seems to be no corresponding push to ensure that patients are protected from violation of their rights when they access such care.

Deepa of SAMA (Delhi) spoke of the survivors of gender based violence, who access hospitals for treatment; they frequently experience discrimination, judgemental attitudes, and do not receive any documents that may aid them in seeking justice. She also highlighted experiences of patients who participated in phase III clinical trials are often not provided comprehensive information about the trial, including risks.

Sunita Singh from Sahayog and Health watch Forum, Uttar Pradesh spoke of the Clinical Establishment Act, which has been adopted by the State but there is a complete absence of implementation.

Ameer Khan (JSA Tamil Nadu)– shared some experiences of implementation of the CEA; it is currently not being implemented in most states and wherever it is adopted, and patients’ rights do not feature in the CEA.

Jayant Singh (All India Patient’s Rights Group)–support the demand for the adoption of the Patients Rights Charter along with the redressal mechanism for speedy justice. The AIPRG has launched today the AIPRG.org website which is for patients’ rights awareness and assistance and support of those who have such violations.

Abhay Shukla (JSA Maharashtra) stated that several states have adopted or are in the process of adopting the national Clinical Establishments Act or are enacting their own State level legislations like the Nursing Homes Act to regulate hospitals. This was a good time to incorporate provisions for patient protection into these legislations, which will provide the necessary legislative and regulatory mechanism for ensuring patients’ rights.  He added that the implementation of the Ayushman Bharat national health insurance scheme through tie-ups with private hospitals made it even more urgent and important to have such mechanisms for patient protection. Further, the National Pharmaceutical Pricing Authority (NPPA) has also noted large-scale profiteering in stent implantations in private hospitals.  In response to the price control on stents, private hospitals have increased the cost of the procedure, effectively not passing on any benefits to the patients. Such unethical practices only underline the imperative of having the Clinical Establishments and effective patients’ rights.