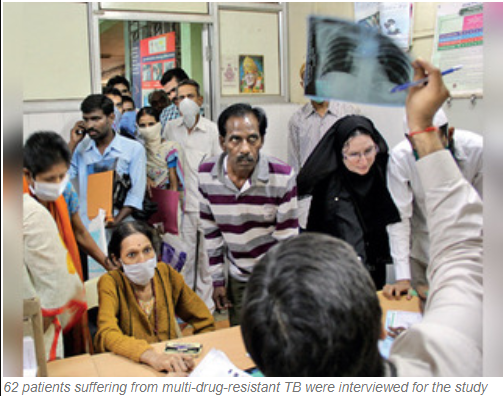 Greater awareness about tuberculosis drugs and their side effects can help patients cope with their condition better and reduce the “default rate”, the number of people who quit their treatment midway, a study has revealed.

Doctors from Sewree TB Hospital conducted the study after collaborating with the Indian Council of Medical Research. Sixty-two patients suffering from multi-drug-resistant (MDR) strain of the disease were interviewed and nearly half of them did not have any knowledge about the side effects of their medications or the ways to tackle them.

The drugs for battling MDR TB can cause vomiting, rashes, joint pains, mood changes, ringing in the ears, vision problems and flu-like symptoms, making it extremely difficult for the patients to function normally. Doctors refer to the effects as adverse drug reactions. Often, people give up the treatment, hoping they will feel better. But this only complicates the issue: breaks in treatment increase the chances of developing a tougher strain.

There are also instances where patients don’t know that there are medicines that can help them manage the side effects.

The study, thought to be first of its kind, suggested extensive and regular counselling of patients to deal with all types of problems to the TB medications.

MDR TB is caused by the bacillus Mycobacterium tuberculosis strain, which is resistant to the first-line drugs such as rifampicin and isoniazid. Instead of the regular six-month treatment, patients with the strain have to take second-line medicines for more than 20 months.

Ninety per cent of the 62 patients interviewed for the study had good general knowledge about the disease. However, only 52.3 per cent were aware of adverse drug reactions or the fact that they can be managed or prevented. Forty-three per cent of the patients believed the reactions were not caused by drugs meant to fight TB.

Patients who are malnourished, have a history of alcoholism, a pre-existing condition and poor kidney or live function are more prone to experiencing adverse reactions. The guidelines of the World Health Organization recommend regular monitoring and documentation for identification and management of the effects.