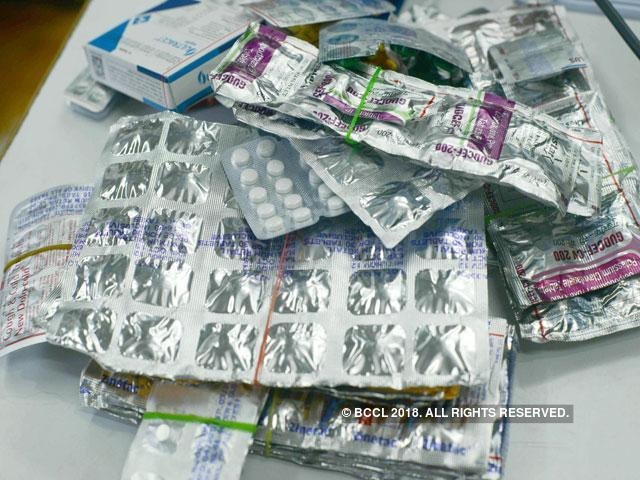 Bijnor: In a major haul, a joint team of the drug department and police raided a house in Sambhal district on Friday morning and seized a huge quantity of sample medicines that was to be sold to quacks in rural areas. According to the officials, 50 sacks of drugs valued in crores were seized from the house.

Addressing a press conference, Sudhir Kumar Singh, superintendent of police, Amroha, said, “Police were checking vehicles in Hasanpur on February 7 and intercepted a car. They seized three sacks of medicines. When asked for bills of the medicine, car driver Waseem failed to show any document.”

The driver was detained and car seized. Police informed drug inspector of Amroha, Piyush Kumar, and drug inspector of Moradabad, Naresh Mohan Deepak, about the matter. They reached Hasanpur police station on February 8 and examined the medicines. They found that all the medicines were labelled “physician sample” and “not for sale”.

The SP said, “When police grilled Waseem, he said he is a resident of Chaudhary Saray Kotwali of Sambhal district and had brought these medicine from Delhi to sell to quacks in rural areas. He also runs a medical store. He revealed that another person, Mohammad Raes, a resident of Turtipur Illaha under Nakhasa police station of Sambhal district, was his business partner.”

Thereafter, the Amroha police with a team of drugs department comprising drugs inspectors of Moradabad, Bijnor, Amroha, Rampur and Sambhal raided the house of both Raes and Waseem and recovered 33 sacks of medicine from Raes’ house and 14 from Waseem’s house. The samples have been sent to the forensic laboratory,” the SP said. A case has been registered against the duo.