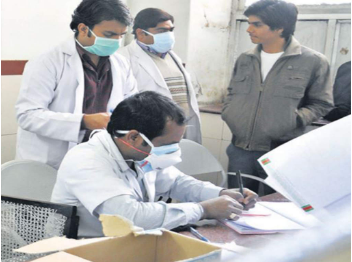 JAIPUR: Swine flu has resurfaced in the state as 13 persons have died while 131 tested positive for the disease in the first 20 days of September.

The spurt in swine flu cases has caught health department officials off guard. In 2017, September was the worst affected month due to swine flu as 1,807 cases were reported.

According to health department reports, 147 persons have died due to swine flu till date in 2018, while in the same period 1,492 persons have tested positive for the disease.

Out of 131 cases reported in September, majority of them were reported from Kota division. The districts of Kota division — Bundi, Jhalawar, Baran and Kota are worst affected due to H1N1 influenza.

The health department report shows that three persons died in Kota, four in Baran and four in Jhalawar in September, while 65 new cases of swine flu were reported from Kota, 15 from Baran, 11 from Jhalawar and nine from Bundi.

In Jaipur too, 10 persons were diagnosed with the disease and one person died of swine flu in past 20 days.

On Thursday, 12 persons were tested positive for swine flu, seven of them were diagnosed in Kota, two each in Jhalawar and Bundi. One person was diagnosed with the disease, who belonged to Madhya Pradesh.

He said that they have directed the officials to remain alert to prevent mortalities due to swine flu. They have been directed to take steps for early detection of the disease and also to take measures for treatment of patients in which there is high risk of mortality such as pregnant women, infants and those who are suffering from chronic diseases.