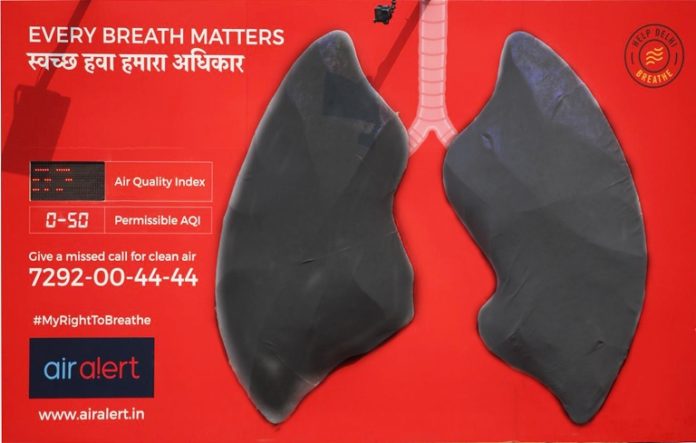 New Delhi: In just two days, giant lung exhibit in Sir Ganga Ram Hospital has turned pitch dark from snowy white.
This artificial lung was installed in the campus of the hospital to mirror how toxic Delhi-NCR air is wreaking havoc on hapless lungs of people living here. The installation depicting human lung is part of the campaign
An installation depicting human lungs was unveiled today at Delhi’s Sir Ganga Ram Hospital as part of a campaign launched by the Help Delhi Breathe initiative, the Lung Care Foundation and the hospital.

The installation at Sir Ganga Ram Hospital was conceptualized and fabricated by Jhatkaa, a Bangalore-based non-profit organization that is active in the clean air movement. The lungs are fitted with white Hepa Filters, which due to exposure to Delhi air turned black, demonstrating the impact of air pollution on healthy lungs. 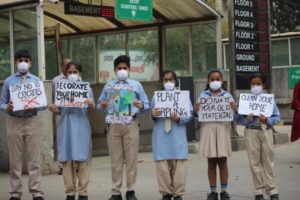 “I’ve seen a change in the colour of lungs over the past 30 years that I’ve been operating. Earlier, I used to see black deposits only in smokers and others would have pink lungs. But, nowadays, I only see black lungs. Even teenagers have black spots on their lungs. This is frightening. With this unique installation, we hope to show people the reality of what’s happening to their lungs”, said Dr. Arvind Kumar, Founder Trustee, Lung Care Foundation, Chairman – Centre for Chest Surgery, Sir Ganga Ram Hospital.

Each winter, Delhi’s air pollution rises to critical levels. Experts say the impact of the foul air on public health can be compared to smoking 15-20 cigarettes a day. “Air pollution has reached alarming levels in Delhi and is causing severe damage to the health of the citizens. We have to act immediately to control this menace; otherwise the health consequences will be disastrous. We are already seeing an increasing number of patients in our hospital continuously complain about cough, irritation in throat and nose”, said Dr S.P. Byotra, Vice-Chairman, Board of Management, Sir Ganga Ram Hospital.

Inspired by the World Health Organization’s (WHO) first-ever global conference on air pollution held recently in Geneva, the campaign hopes to raise awareness on the effects of air pollution in the capital and to urge policymakers to take prompt remedial action.

According to the organizers, the installation is a reminder of a warning issued by WHO Director General Tedros Adhanom Ghebreyesus: “The world has turned the corner on tobacco. Now it must do the same for the ‘new tobacco’ – the toxic air that billions breathe every day.” 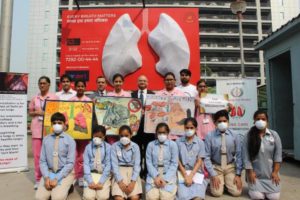 Despite the warnings, New Delhi still occupies the position of one of the most polluted cities in the world. There isn’t public outcry and citizens remain unaware of the severe pollution levels. “The impact of air pollution on our health is evident. Yet both the Delhi government and the Central government have failed the citizens. We need to take bold steps to course correct this deadly path India is on. In the name of development, industries are polluting without consequence. As citizens, we need to hold our representatives accountable for the environment. This election year citizens should say loud and clear: ‘Saans Nahin Toh Vote Nahin.’”, said Reecha Upadhyay, Campaigns Director, Help Delhi Breathe.

Children in the city are the most vulnerable to air pollution. The Help Delhi Breathe campaign aims to unearth stories that highlight the deleterious impact of air pollution on citizens. Its volunteers cite the example narrated by Delhi citizen and mother Bhavreen Khandari: “I have 14-year-old twin girls, studying at Step by Step school. They play junior national-level basketball but can’t in these health deteriorating conditions. As a mother, I can’t afford to take a risk with their health. Every day, the media reports that Delhi’s air quality has crossed hazardous levels. I want to know what our Government is waiting for? The situation is out of control and we need urgent action!”