Holding a cell phone to your ear for a long period of time increases activity in parts of the brain close to the antenna.
Clearly there is an acute effect, and the important question is whether this acute effect is associated with events that may be damaging to the brain or predispose to the development of future problems such as cancer as suggested by recent epidemiological studies. There have been many population-based studies evaluating the potential links between brain cancer and cellphone use, and the results have often been inconsistent or inconclusive. Most recently, the anticipated Interphone study was interpreted as “implausible” because some of its statistics revealed a significant protective effect for cell phone use. 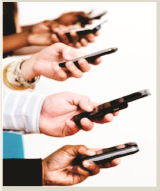 “Half of teens think  they’re addicted to  their smartphones  50% of teens and 27% of parents feel they’re  addicted to their  mobile devices, poll says Nearly  80% of teens check their phones hourly;  72% feel the need to  respond immediately”

On the other hand, the most intense users had an increased risk of glioma but the researchers called their level of use “unrealistic.” But few researchers have looked at the actual physiological effects that radiofrequency and electromagnetic fields from the devices can have on brain tissue. Some have shown that blood flow can be increased in specific brain regions during cell phone use, but there’s been little work on effects at the level of the brain’s neurons.

But glucose meta-bolism in the regions closest to the antenna the orbit of rontal cortex and the temporal pole was significantly higher when the phone was turned on. Further analyses confirmed that the regions expected to have the greatest absorption of radio frequency and electromagnetic fields from cell phone use were indeed the ones that showed the larger increases in glucose metabolism. Even though the radio frequencies that are emitted from current cell phone technologies are very weak, they are able to activate the human brain to have an effect. The effects on neuronal activity could be due to changes in neurotransmitter release, cell membrane permeability, cell excitability, or calcium efflux. It’s also been theorized that heat from cell phones can contribute to functional brain changes, but that is probably less likely to be the case.

Half of teens think they’re addicted to their smartphones 50% of teens and 27% of parents feel they’re addicted to their mobile devices, poll says Nearly 80% of teens check their phones hourly; 72% feel the need to respond immediately. The average college student uses a smartphone for about nine hours each day. That’s longer than many of those students spend sleeping. It’s well known that people can become addicted to drugs, such as alcohol, narcotics and the nicotine in cigarettes. Some cell phone users show the same symptoms that a drug addict might have. Certain people use smartphones to lift their moods. And it may take more and more time on those phones to provide the same level of enjoyment. For such people, losing a phone or having its battery die could cause anxiety or panic. Too much phone use can interfere with normal activities or cause conflicts with family and other people.