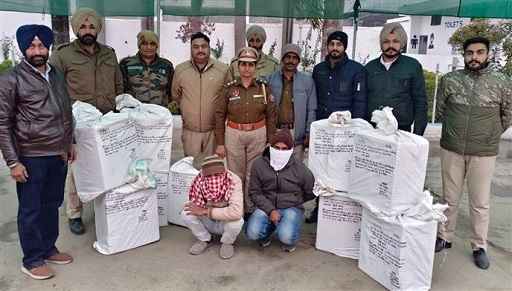 Amritsar : Following the arrest of two more persons in connection with the interstate racket of illegal manufacturing and trafficking of tramadol tablets, the city police are now trying to identify the chemists or others who were involved in the illegal purchase and sale of the tablets.

Till now, the police have nabbed seven persons in the racket, including Usman Rajput, owner of a pharmaceutical firm — Rapport Remedies — located in the industrial area of Dehradun in Uttarakhand.

Besides Rajput, others who were arrested included Nishan Sharma of Sunder Nagar and Rajiv Kumar of the Namak Mandi area here, Nitin Singh of Rohini, Delhi, Sanjiv Arora of Vikas Puri in Delhi, Rishi Kumar of Muzaffarpur in Bihar (now residing in Budh Vihar of Delhi) and Rajan Kumar of Saran district, Bihar.

The racket was busted following the arrest of Nishan Sharma and Rajiv Kumar on December 21 when the police confiscated 29,920 tablets of tramadol and Rs 29,000 were seized from their possession. Their interrogation led the police to Usman Rajput who was arrested with 4.05 lakh of tramadol tablets. Ironically, his licence was already cancelled by the drug authorities in Dehradun. His firm was sealed by the Punjab Police on December 26.

The record seized from the spot led the police party to Nitin Singh and Sanjiv Arora who were operating a distribution firm in the name of ‘A Phrama’. During the probe, the police found no such firm existed physically. Further probe resulted led to the arrest of Rishi and Rajan, seizure of 3.63 lakh of tramadol tablets and Rs 4 lakh of drug money from their possession following a raid at their godown in Uttam Nagar, Shiv Vihar, in Delhi.

Police Commissioner Jaskaran Singh said investigations carried out so far revealed that they had formed illegal firms on the basis of fake documents. They used to procure sedative pills in the name of these firms and later further sold them on fake bills. After six or seven months of operation, they used to shut down the firm and created another fake firm. They were planning to create three more such firms for future illegal operations, he told.

He said the parcels in which they used to courier the drugs contained the stamp of general drugs and they would put tramadol in these parcels.