New Delhi: Adding up what experts gathered in Delhi for International Symposium said, wheat could be villain of the piece behind any health condition. It can wreak havoc on any part of the body including brain. Diabetics especially need to be wary of this cereal, they said.

They recommended that, for any disorder or health symptoms, patients should first rule out wheat as the cause. Maybe simply by being off wheat for a couple of weeks, conditions go away. Though Indian experts fought shy of declaring wheat as a health hazard for all and sundry, renowned international experts minced no words in branding wheat as a ubiquitous cause of illnesses.

Dr Tom O’Bryan, DC, CCN, DACBN, Adjunct Faculty, the Institute for Functional Medicine, Scientific Advisory Board-International and American Association of Clinical Nutritionists, said in no uncertain terms that wheat should be treated just as we treat sugar, which is universally regarded as a health hazard. Mr O’Bryan further said, ‘Sugar and wheat (new sugar) together could be double whammy on the health of anybody. Wheat is the new sugar and better be wary of it as you do regarding sugar. Diabetics would be well advised to ditch wheat completely. Celiac disease and sensitivity to gluten is just one aspect of wheat hazard. Wheat has potential to harm everyone. ’

According to experts, Wheat is listed as one among the top eight food allergens and adverse reactions to wheat and wheat protein can be in the form of an allergy, celiac disease, skin rashes (dermatitis) or intolerance also known as non-celiac gluten intolerance (NCGI). Symptoms for allergies could be respiratory, asthma, atopic dermatitis, urticaria, and anaphylaxis & many more. In some individuals, it can remain silent without symptoms.

2 day International Symposium on Wheat Related Disorder (ISWD) is being organized at India Habitat Centre under the aegis of The Celiac Society of India (CSI) starting January 12 to discuss and explore best ways to address the challenges faced by patients with celiac disease and discuss the way forward. It is the first international conference on the issue. The conference is being organized to create awareness about early diagnosis and management of celiac disease. The event will be attended by experts from across the globe including experts from USA, UK, Germany, Italy, New Zealand & Israel.

Ms Ishi Khosla, Founder President, Celiac Society of India, said, ‘Celiac disease and sensitivity to gluten in wheat are commonly unreported extensively in India due to lack of awareness. This is also the biggest impediment in prevention and treatment. Through this symposium, the aim is to not target wheat but rather to help those suffering from wheat sensitivity to get diagnosed and to lead better lives. The symptoms and screening tools must be known to doctors, health care professionals, and public and this event will help in doing that and more. With the outcomes of the symposium, we will be presenting a white paper with recommendations to the government from a public health stand point.’

Dr Sarath Gopalan, a leading paediatric Gastroenterologist and Organising Secretary of ISWD 2019 stressed the need to spread awareness about wheat related disorders, particularly celiac disorder in Children. Senior consultant in Madhukar Rainbow Children’s Hospital, Dr Gopalan said, ‘Given the increasing incidences of celiac disease in India, food regulators need to intervene effectively.’ Professor Dr Anupam Sibal, Group Medical Director of the Apollo Hospitals Group and a leading paediatric Gastroenterologist said that wheat related disorders need to be given due place in the management scheme of diseases, particularly keeping in mind the health of the children.

Talking to Medicare News, Mr Pawan Agarwal, CEO of India’s food regulator, the Food Safety and Standards Authority of India (FSSAI) said, ‘FSSAI is seized of the matter and moving to do the needful. The area of wheat related disorders is still evolving. Wheat is a staple in India. FSSAI would look forward to more inputs on wheat related.’ 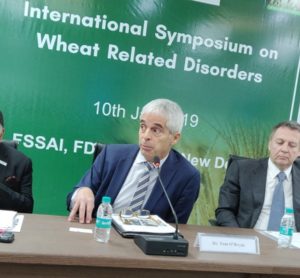 Dr O’Bryan further said, ‘Once thought as a Western disease, Celiac Disease is yet to receive the much-needed concern in India and Asia as a whole. The incidence of this condition has increased five-fold in the last since 1974. Apart from the fact that it can occur at any age and is highly under diagnosed, celiac disease and gluten sensitivity can impact both physical and mental health. The need of the hour is to increase awareness among people and physicians alike.’

Dr K K Aggarwal, President, Heart Care Foundation of India, added “Wheat has been a fundamental source of nutrition for ages in India. Due to the growing sensitivity related to this power grain, it has become imperative to create awareness on a larger scale. While a lot of research has been going on in this area, there is still much ground to be covered. The fact that wheat-related diseases are also associated with other conditions such as mouth ulcers, anaemia, osteoporosis, arthritis, easy fractures, etc., there is an urgent need to explore treatment options and safer or less harmful alternatives to wheat.”

Celiac disease is an autoimmune disease that occurs because of ingestion of a protein, called gluten, which is present in the cereals – wheat and barley. In these patients, the gluten protein is not digested completely and that leads to damage to the small intestinal mucosa (where food is absorbed). With the damage of small intestine, the food is not absorbed and thus, these patients fail to grow in height and weight, develop chronic diarrhoea, anaemia (low haemoglobin), and weakness of bones.

Statistics peg the prevalence of Celiac Disease at 1% at a global level. Additionally, the prevalence of wheat related disease is about 6% and more than 90% cases remain undiagnosed. In India, about 6 to 8 million Indians are estimated to have this disease, and its prevalence in the North Indian community is 1 in 100. The aim of the event, therefore, is to bring to the spotlight this growing condition among medical professionals, other healthcare service providers, and the public at large. There will also be an Expo showcasing gluten-free products.