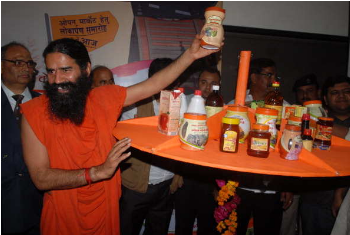 NEW DELHI: Patanjali Ayurved could be overtaking India’s FMCG market leader Hindustan Unilever as Baba Ramdev desires. In April last year, Ramdev said Patanjali’s target was Rs 20,000 crore to Rs 25,000 crore turnover in the next three to five years. But it seems the company is far from the ambitious finishing line. It closed the last financial year at around the same level as the previous fiscal year’s revenue, Rs 10,000 crore.

However, there could be a bigger worry for Patanjali than flat revenues. According to a recent Credit Suisse report, consumer offtake has declined in many product categories. While the company continues to hold sway over toothpastes with Dant Kanti, and in ghee, incremental gains in these categories are said to have declined. “Patanjali is facing headwinds with FY18 sales growth flat YoY after a 100% CAGR for the past four years. Several categories are seeing declining offtake levels, most prominent among them being honey and hair care. Even strong segments such as toothpaste are seeing market shares plateau,” says the report.

1. Brand fatigue setting in due to the lack of renovation
According to the report, Patanjali saw a massive surge in household penetration in calendar year 2017 from 27 per cent to 45 per cent, driven mainly by non-core users who bought into the ayurvedic and naturals positioning of the brand rather than core loyalists. “We are seeing many of these consumers lapsing out as the novelty value and buzz around the brand has gone down and other companies are offering similar products,” it said.

2. Inability to crack general trade distribution
Patanjali started out by selling its products from its own network of chikitsalayas and then spread to the general trade distribution. That’s where it found itself pitched against giant incumbents such as Hindustan Unilever, Colgate and Nestle. According to an ET report, Patanjali products were available in 2016 in two lakh traditional retail outlets popularly called as kirana shops. That was 1/30th the presence of FMCG market leader Hindustan Unilever in the kirana universe (over 60 lakh outlets). For Colgate and Nestle, the numbers were 47 lakh and 35 lakh, respectively. According to a recent ET Prime report, Patanjali’s own chikitsalaya network faces stress as the company is focusing on new distribution and trade channels. The report said Patanjali had developed an uncontrolled hunger for new distributors and new channels of trade, often at the expense of older allies. General trade distribution remains a challenge for the company.

3. Dilution of the ayurvedic credentials due to excessive extension
Patanjali started out as an ayurvedic pharmacy and expanded into herbal and organic food products. Slowly, as its popularity grew, it started expanding away from its standard ayurvedic portfolio into products such as biscuits, noodles and toothbrushes. Patanjali is now planning to foray into apparel and frozen vegetables. This might have diluted its image of an Ayurvedic company.

4 Strong competitive response from large companies with their own Ayurvedic offerings
FMCG companies like Colgate and HUL are investing heavily in natural products to lure back consumers who may have drifted to the rival camp, says the report. Competitors like Dabur and Colgate have been defending their turf. While Dabur responded with strategic pricing, HUL launched nationally an ayurvedic range of products. Colgate, too, was forced to come up with an ayurvedic offering. Spoilt for choices, consumers could have temporarily veered away from Patanjali, says the report.

5. Sharp drop in advertising spends by the company
According to a May report by exchange4media.com, out of the 16 weeks this year, the company did not appear in BARC’s list of Top 10 Advertisers for six weeks. Even in the other nine weeks, the brand featured at the bottom end of the category (between 5 and 10). In fact, in Week 16 (April 14-20), Patanjali was at the bottom spot with 16,539 insertions.