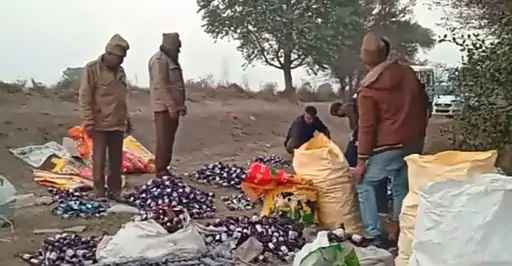 Jind : A large quantity of banned medicines has been found near the Karsola Minor of Julana in Jind, Haryana. It has been said that the driver of a canter threw them here and fled. A total of 7,456 Bottles of different companies including Corex have been found on the spot. The government has banned the sale of all these medicines.

Julana resident Bhupendra Singh said that his farm is near Karsola Minor. When he went to his farm, he saw that a lot of medicines were lying on the track of the miner adjacent to his farm. On this he informed the police on dial 112. After which Julana police reached the spot and started investigating the matter.

On looking at the medicines, it was found that all these medicines are intoxicating and banned, so local drug control was contacted. Ankit Mann, SDO of Irrigation Department was posted as Duty Magistrate. The medicines were counted in the presence of the Duty Magistrate.

The medicines which were put on the track of Karsola Minor were filled in bags and put. The police reached the spot and collected the medicines from the sacks in the presence of the Duty Magistrate. After that they were trimmed and kept separately according to the company and later they were counted.