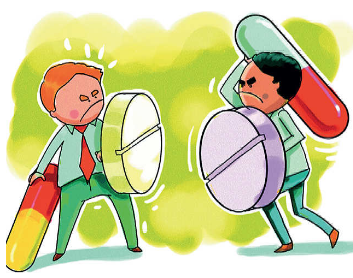 AstraZeneca has filed a lawsuit in the Delhi High Court against Indian drug maker Dr Reddy’s Laboratories to block it from launching generic versions of Brilinta, its blockbuster medicine for heart ailments.

The UK biopharmaceutical company claims potential launch of copies infringes its existing patent on the drug. Court asked Dr Reddy’s on Tuesday to file a reply to the lawsuit and will hear its arguments on July 31, said lawyers aware of developments. Until then, Dr Reddy’s cannot launch its generic version of the drug, they told ET.

Copies of the drug can be manufactured only after all the patents covering it expire, AstraZeneca’s counsel argued in court on Tuesday.

Brilinta, used to reduce chances of heart attacks or strokes by preventing blood clots in vessels, achieved blockbuster status in 2017 when it raked in over $1billion in global sales for AstraZeneca. Dr Reddy’s generic version was to be marketed as Ticaflo, according to people aware of the development. Dr Reddy’s has not been seen as an aggressive challenger of drug patents in India.

One of AstraZeneca’s key patents for Brilinta expired in India earlier this month, triggering launch opportunities for local drug makers, said people familiar with the development. However, AstraZeneca argued that one patent is still valid and effectively bars commercial launches of copies.

AstraZeneca filed similar lawsuits against Natco Pharmaceuticals and Micro Labs earlier this year and the two have also been blocked since May from launching their own copies of the drug.

Micro Labs alleged in earlier court hearings that AstraZeneca was attempting to “evergreen” its patent on ticagrelor, which means the innovator of the drug is keen to prolong its monopoly of the product beyond its legitimate patent life. Leena Menghaney, South Asia regional head for Médecins Sans Frontières’ Access Campaign said it was a “classic tactic.”

“The matter is sub judice and no comments can be made at this stage,” a spokesperson for AstraZeneca told ET. Dr Reddy’s said it was unable to comment on the developments at this time.