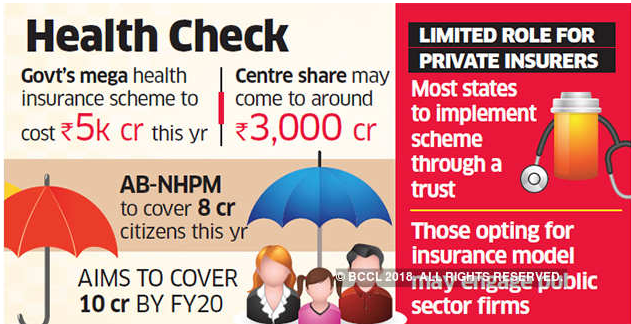 The government’s mega health insurance scheme Ayushman Bharat — National Health Protection Mission (AB-NHPM) may cost the exchequer around Rs 5,000 crore this year because of the time taken to rollout the scheme. The scheme will cost Rs 10,000 crore when its rolled out across India next year.

While this year there will be 8 crore beneficiaries, the target is to cover 10 crore by FY 20.

The government also sees a limited role for private sector insurers in AB-NHPM and the first preference will be given to implementation by the states in assurance mode, said a senior government official aware of the development.

The other options are insurance mode or a combination mixed mode. Assurance mode covers the entire gamut of health protection from sanitation and prevention to care during an illness. Insurance mode, usually, only covers expenses related to hospitalisation.

In the first year, out of the total expenditure of Rs 5,000 crore, the central government may bear the burden of around Rs 3,000 crore which will increase to almost Rs 7,000 crore in FY20.

AB-NHPM aims to provide a benefit cover of Rs 5 lakh per family per year. The target beneficiaries of the proposed scheme will be families belonging to the poor and vulnerable population based on Socio-Economic Caste Census (SECC) database.

Ayushman Bharat to cost Rs 5k cr this year
So far, 20 states have agreed to implement the scheme and have signed a memorandum of understanding (MoU) with the centre government.

The states will need a State Health Agency (SHA) to implement the scheme. They will also have the option to use an existing trust as an SHA. “If the states want to implement the scheme in insurance mode, they may limit the bidding only among public sector companies,” said the official quoted above, adding that if an open bid is invited and the lowest bidder is a private sector firm, then a public sector company will be given a chance to meet the lowest bid.

“If the public-sector company matches the bid in that case the state will be divided in two equal zones, and one will be given to the private player,” he added.

An industry expert, however, said that states will find it difficult to operate in a trust mode as the state government will rely on third party administrators, which will have no accountability to prevent frauds or stop leakages.