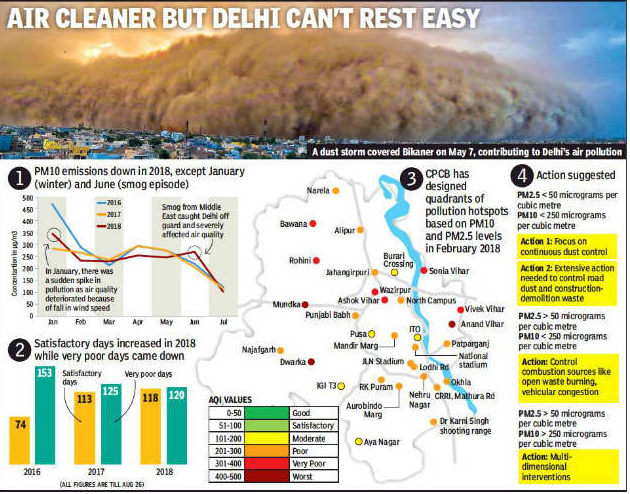 NEW DELHI: The air quality in the National Capital Region has improved in 2018 compared with the last two years, Central Pollution Control Board (CPCB) said on Monday.

An improvement in PM2.5 and PM10 concentrations has been recorded this year except for two high pollution periods — in January and June.

The CPCB’s air quality index assessment during 2016-18 also suggests that the number of “satisfactory” air quality days has gone up, while there have been fewer “very poor” days this year.

Proper implementation of the graded response action plan, ban on pet coke and closure of the Badarpur power plant in winter may have led to the reduction in air pollution, CPCB officials claimed.

To sustain this improvement, CPCB plans to start action on tackling winter pollutants from September 15. Forty teams of CPCB officials will fan out across the city and report on emission sources to the Delhi government and central agencies.

The ministry of earth sciences is chipping in by developing an early warning system by October to prepare for pollution spikes. Forecast from Indian Meteorological Department is already being used.

Apart from directions to be issued to industries and brick kilns in NCR, a central package of Rs 1,100 crore for in situ crop residue management will ensure farmers can use machinery to mulch crop stubble through custom hiring centres, Prashant Gargava, CPCB’s member secretary, said.

CPCB visits to pollution hotspots, such as RK Puram, Anand Vihar and DTU may be intensified this year depending on pollution levels.

CPCB plans to utilise the Environment Protection Fund, which was created following a Supreme Court order in August 2016 when the court imposed a 1% pollution charge on sale of SUVs, to fund several pilot studies. Three of these pilots may be tested this year. Among them are WAYU air filters by National Environmental Engineering Research Institute which will be installed at five busy traffic intersections. These filters work like vacuum cleaners and also cause some turbulence to disperse pollutants. But they are effective only in a 20-30m radius and, so, CPCB will have to install as many as 57 such filters. WAYU filters were installed at traffic intersections in Mumbai earlier, but local reports suggest there was no discernible difference.