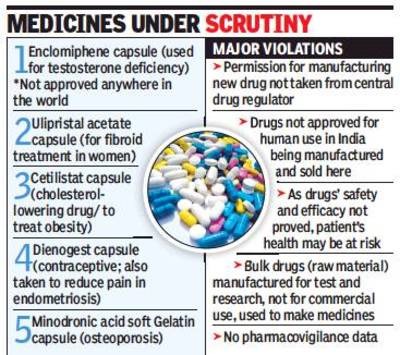 In a shocking case which has come to light of the Union health ministry, domestic companies have been manufacturing and marketing ‘harmful’ medicines, without conducting studies to establish their safety and efficacy, and without approval of the national drug regulator. To make matters worse, some of these drugs are not even approved globally, but are being manufactured in India, putting patients at risk.

In the most recent matter unearthed after multiple raids were conducted on April 3 in Daman, Indore, Bengaluru and Mumbai, Central Drugs Standard Control Organisation has decided to prosecute a littleknown manufacturer Olive Health Care, while companies including Alkem, Intas Pharma, Koye Pharmaceuticals, Macleods Pharma, Pharmanova Speciality and Accumentis Healthcare, are being directed to recall these ‘dangerous’ medicines from the market.

Drugs sold sans regulator’s nod, safety studies
The most serious violation is in the case of Enclomiphene, used for testosterone deficiency, which is not approved by any regulator in the world. Others under scrutiny include Dienogest (used for pelvic pain) and Ulipristal (used to treat uterine fibroids), being manufactured without approval since 2015, official sources told TOI, adding this was only a tip of the iceberg.

Major companies are using loopholes in the Drugs and Cosmetic Act by engaging little-known firms for manufacturing these unapproved and harmful medicines, experts say.