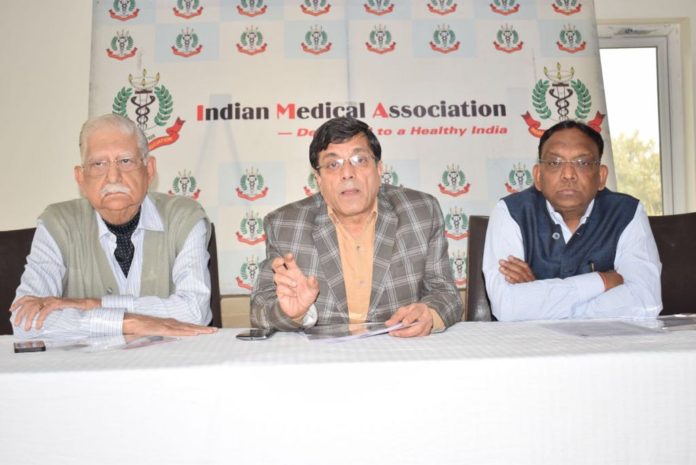 New Delhi: The taste of the initial success in its efforts to stall controversial medical education National Medical Commission (NMC) Bill has enthused Indian Medical Association which is opposing it tooth and nail.

In the face of stiff opposition from the biggest trade union of doctors in the country, the central government developed cold feet and the bill was sent packing to Parliamentary Standing Committee which often proves cold storage for laws found untenable. This development has floated hope for doctors’ body that they might succeed in getting this bill dumped forever. Hence, this is nationwide Yatra to build on this initial triumph IMA.

IMA holds the brief that Bill has the potential to adversely change the character of medical education and healthcare delivery in this country. The bill will inflict irreparable damage on public health from which the nation may take few generations to recover. Announcing Yatras today, IMA leaders alleged that bureaucracy and political class are hand in gloves to grab the autonomous MCI to further their vested interests.

Dr Tandon, Secretary General, IMA said, ‘IMA National President, Dr Ravi Wankhedkar, will fiag off ‘IMA Bharat Yatra” at sunrise on February 25, 2018 from Gandhi Mantapam, Kanyakumari. “Connect with Society and Consolidate the Fraternity” is the theme of the IMA Yatra. Simultaneously yatras will be flagged off from Jammu, lmphal, Ajmer‚ Kolkata and Dwarka. Other leaders of IMA will travel to the nooks and corners of the country creating awareness. All the 1700 Local branches of IMA will conduct cycle rallies in their towns on March 11,2018. Four streams of cycle Yatras will begin from all the directions of the country to converge in Delhi in Doctors’ Mahapanchayat”.

Dr Vinay Aggarwal, Past national president of IMA, said, “The Issue concerning health of the nation and the medical profession will be placed before the Maha Panchayat. NMC Bill will be top on the agenda in Mahapanchayat. Maha Panchayat will announce its decision and further course of action.”

All the local, state branches, central leaders and National President will move out throughout this month to create a momentum and awareness on various issues.