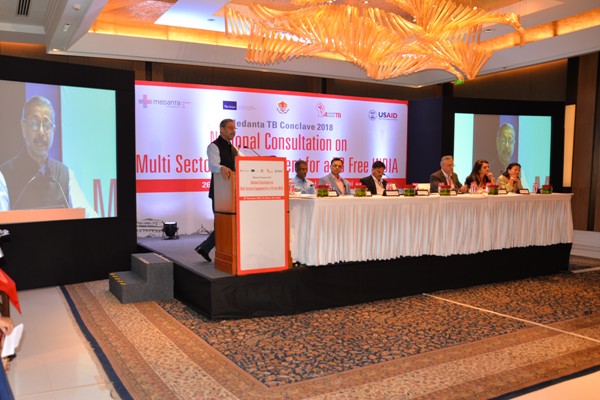 New Delhi: Dr Naresh Trehan, Managing Director, Medanta was awash with accolades on November 26 for his hospital’s exemplary initiative in Haryayna towards making India TB free till 2025, a goal set by PM Narendra Modi. It was not for nothing that USAID’s Xerxes Sidhwa said that Medanta has emerged as a shining example in TB free India mission.

It is a mighty combination of two icons, Amitabh Bachhan from Bollywood and Dr Naresh Trehan from doctors’ community, who have stood as one to power this mission. Big B was present when Medanta lunched its TB free Haryana initiative in 2015. Medanta has since come a long way. TB has assumed epidemic proportions in India and needs to be halted on its track. Medanta has reinforced its commitment by becoming the pioneers of the use of GeneXpert Edge for point of care diagnosis of tuberculosis.

In the mean time, Medanta is all set to scale up its Haryana TB free initiative in many states, Jhakhand being the immediate state. Dr Trehan announced Medanta’s Jharkhand outing in ‘National Consultation on Multi-Sectoral Engagement for a TB-Free India’ on November 26, jointly organised by International Union Against Tuberculosis and Lung Disease, Medanta – The Medicity and Central TB Division of the Ministry of Health & Family Welfare, Government of India. In a daylong conference, the mission was updated threadbare.
Talking to Medicare News, Dr Trehan said, ‘After our success in Haryana in making it TB free, we have decided to scale it up to Jharkhand. In future, Medanta will also take up Indore and UP, where the branch of Medanta is in the offing.’ Dr Trehan further said, ‘when Union health ministry will do rankings of states in terms of TB eradication efforts, Haryana is bound to be in the top.’

Medanta has also been able to rope private sector in a big way for pooling resources needed to give TB free India mission a push forward. Representatives of GAIL India, L&T, Omkar Foundation, Maruti, Apollo Tyres, Nayara Energy Ltd, Gokal Charitable Trust, Jubilant LifeSciences and Ambuja Cement Foundation were all in attendance to show their commitment. Representatives of PSUs, Emplyer’s organizations along with national and international experts were part of the national consultation.

Applauding Medanta’s effort, Mr Sidhwa, Director of the Health Office, USAID India, said, ‘Corporate sector needs to be engaged to scale up Haryana TB free initiative in other states.’ The event was attended by representatives of the government, including DDG, CTD (Deputy Director General, Central TB Division), DHS (Director Health Service – TB) Haryana and United States Agency for International Development (USAID), among others. The conference addressed key challenges in the space of TB diagnosis in India and underlined the need to foster corporate commitment to this topical issue, besides enhancing technology for a TB-free India by 2025.

India has a very large population which remains undiagnosed for TB. Fortunately, technology is being harnessed to give accurate screening and diagnosis a big boost. The GeneXpert Edge also known as CB-NAAT, is a portable, easy-to-use system, developed specifically for hard to reach population and to help support point of care diagnosis approach. It enables accurate, fast, and cost-effective test results. Additionally, it can detect drug resistance (in both lower volume point-of-care settings and higher volume reference laboratories).

Dr Jamie Tonsing,The Union said, ‘If corporate sectoe supports this initiative by the Government and Medanta, achieving the goal of a TB-free India may become a reality.’

Dr Naresh Trehan, Chairman & Managing Director, Medanta-The Medicity,said, “TB is a very serious scourge eating at the vitals of India. More than 50% patients with pulmonary TB go undetected in India currently. The rise of drug-resistant strains of TB has worsened the situation. Social stigma, lack of awareness and inadequate medical facilities further aggravate the problem. In continuation of our commitment to public health and more specifically, a TB Free India, we have introduced a unique system, GeneXpert Edge. This adds speed and scale by virtue of being portable and diagnosing the disease accurately and quickly within a day. After the success of Mission TB-free Haryana, the initiative will expand to other states, starting with TB-free Ranchi in Jharkhand.’’

Internationally acclaimed respiratory disease expert, Dr Bornali Datta, Associate Director, Respiratory &Sleep Medicine, Medanta said, “People usually do not visit a doctor until they are significantly unwell. Since TB patients can remain reasonably functional for several months, it leads to delay in diagnosis. Under Mission TB-Free Haryana, we have screened over 13,000 patients with chest x-rays and with the introduction of GeneExpert in the pre-existing vans, we hope to increase the accuracy of our diagnostic tools.