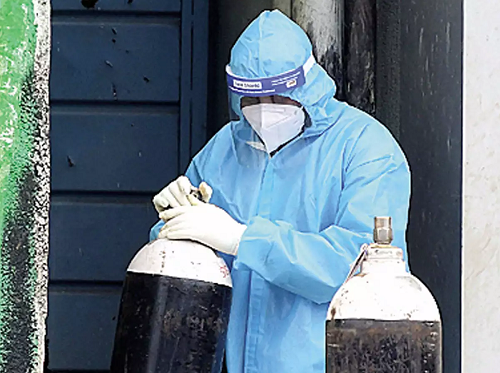 NAGPUR : A staggering 516% jump in medical oxygen use in 43 days between February 21 and April 4 this year underlines the severity of the Covid infection spread in the district.

Data released by Food and Drugs Administration (FDA) showed that oxygen consumption was 19 metric tonne on February 21 this year. On Sunday (April 4), the data revealed consumption of 117 metric tonne medical oxygen. The rise had been steady and uniform over the period with the steepest jump registered between March 25 and March 26 when it had increased from 81 metric tonne to 91 metric tonne followed by another seven metric tonne (98 MT) on the following day, i.e. March 27.

In view of the scarcity and growing demand vis-à-vis shooting number of Covid patients requiring hospitalization, district collector Ravindra Thakare had instructed the lone liquid oxygen manufacturing unit of Nagpur — Inox Air Production Private Limited — to produce and supply the gas only for medical use by suspending production of industrial grade oxygen.

FDA authorities, under joint commissioner Mahesh Gadekar and assistant commissioner PM Ballal, too have suggested judicious use of oxygen by the hospitals.

Strict monitoring of production, supply and proactive measures like getting supply from Bhilai by FDA and the central control room did now allow oxygen stock to dwindle so far, said sources.

Despite high demand, the balance stock of oxygen in the district has remained around 142 metric tonne. Though the production had decreased from around 182 MT on March 3 to 174 MT on March 4, the increased outsourcing of around 67 MT had led to an optimum stock position.

“We are exploring all options to save and supply oxygen to hospitals so that there is no shortage, but at the same time we cannot afford over-stocking. The hospitals have been told to conduct checking of their oxygen supply mechanisms,” said a FDA source, adding oxygen audit at the hospitals is set to kick start soon.