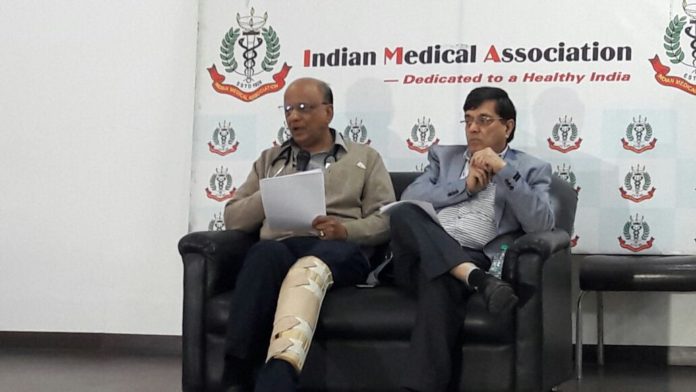 New Delhi: Corporate hospitals seem to be in for an existential crisis of sorts, what with one private hospital already de-licensed and another on the verge of losing its land lease and generalized visceral public distrust towards them. The already bruised patient –doctor relationship and trust between them have nosedived to its lowest ebb.

Faced with unprecedented public outrage and governments’ stern stance constrained by the populist pressure, private hospital behemoths have supposedly latched onto IMA, the biggest trade union of allopath doctors of the country, numbering over3 lakh and have mandated it to assuage harsh public opinion and stem flogging by media.

IMA unveiled a slew of patient friendly reforms that it claimed had the endorsement of private hospitals on December 11. That IMA is quite unequal to the task was evidenced by press conference scenario in its headquarters where Dr K K Aggarwal, president of the doctors’ body, had to plead media people not to carpet bomb him with prickly questions as if he was facing a lynch mob.

Media was in full force and armed with enough ammunition to hurl at the IMA interlocutors. Sensing uncharitable assaults, IMA almost came on all fours. Dr Aggarwal ate a humble pie and begged saying with folded hands: ‘please, spare us of questions. We are already sad and it is not fair to make us sadder.’ He said let law take its own course and media should desist from doing its own trial.

Shalimar Bagh Max mishap declaring a live new born dead and Gurgaon Fortis hospital allegedly billing excessively (15lakh) for treatment of 7 year old dengue afflicted girl have precipitated unprecedented crisis for private hospital chains. In a knee jerk reaction, Delhi AAP government, in a bid to play to the gallery and earn some brownie points, took the extreme step of annulling the license of Max Shalimar Bagh and left hapless patients recouping in the hospital stranded. Haryana government is said to have moved towards canceling land lease of Fortis.

These intimidating happenings have perturbed healthcare honchos no end. It is evidenced by the fact that on last Saturday (December 9), corporate hospital tycoons and top mandarins huddled together with IMA officials chipping in, to assess the present crisis and find ways to avert the bigger ones that might precipitate in future.

However, IMA proposed certain self-regulatory procedures for doctors and hospitals to adopt, claiming they have approvals of all the stake holders.

Unveiling them, Dr Aggarwal and Dr RN Tandon – Secretary General IMA in a joint statement, said, ‘We represent the collective consciousness of the largest medical association of modern doctors of the country. A profession, which has been considered as second to none, is, today, being looked at with suspicion. However, the medical profession is the noblest profession. It is disheartening to see the erosion in trust and we want to make it more transparent. IMA is and will continue to work towards improving doctor-patient relationship. IMA is committed to practicing with humility and pledges to reform the existing system.’

They gave the undertaking that all doctors shall practice with compassion and follow IMA’s ALERT policy (Acknowledge, Listen in detail, Explain, Review and Thank you).

IMA also announced formation of an IMA Medical Redressal Commission at the state level (in each state) to engage in social, financial, and quality audits of health care. The commission will have a public man, an IMA office bearer, one former state medical council representative, and two subject experts.

Adding further, Dr Aggarwal, said, ‘We are often blamed for prescribing costly drugs. From today onwards, all doctors in the country shall choose affordable drugs. We also appeal to the government to come out with an urgent ordinance for one drug-one company-one price policy. Doctors should actively participate in ensuring that no hospital sells any item priced higher than the MRP. No service charges should be added to procure drugs from outside. MRP shall not be dictated by the purchaser.

IMA has recommended that all doctors should prescribe preferably NLEM drugs. All doctors shall promote Janaushidhi Kendras. ‘We appeal to the government to classify all disposables under both NLEM and non-NLEM categories and cap the price of essential ones. Till then all medical establishments should sell the disposables at procurement prize after adding a predefined fixed margin.

Hospitals and doctors are often blamed of overcharging and over investigations. Billing should be transparent, and all special investigations should be well informed. Every doctor should ensure that it becomes mandatory on the part of the hospital administrator to give options at the time of admission to choose cost-effective treatment room and treatment (single room, sharing room, and general-ward) and explain the difference in total bill estimates. All doctors should ensure that hospital estimates at the time of admission are near actual. The treating doctor must explain the chances of death and unexpected complications and resultant financial implications.

Emergency care is the responsibility of the state government and the government should subsidize the costs of all emergencies in private sector. Every medical prescription must include counseling on the cost of drugs and investigations.

No hospital can force their consultants to work on targets. Contractual agreements should be in such way in which interested of both parties that is consultant and the hospital is equally protected. All hospitals should consider not charging service charges from the consultants. Choice of drugs and devices rests with the doctors based on the affordability of the patient and not on the profitability.

All hospitals must comply with the commitment towards EWS, BPL, and poor patients without any discrimination. All medical establishments must ensure that their business ethics comply with the MCI ETHICS.

The patient has a right to get medical records within 72 hours of request. The patient has the right to go for a second opinion from an appropriately qualified medical doctor. A hospital has no right to stop life-saving investigations or treatment for non-payment of bills if the patient is still admitted in the hospital. The government should make a mechanism for the reimbursement for the above for poor patients. Ensure for us all are equal. BPL, APL, EWS, rich, or poor all should get the same attention and treatment.

We are not against any regulations and accountability, but we should all ask for single window accountability at the state level. The state medical council should be proactive and take timely decisions. We should also ensure a single window registration. No doctors should issue false certificates. All the above should be implemented with immediate effect

Dr Aggarwal said, ‘The above have approval from most stakeholders. A copy of this is being sent to the Health Secretary, Govt of India and Health Minister, Govt of Delhi. Both President and Registrar, Delhi Medical Council, are requested to help in circulating this message to all doctors in Delhi.’