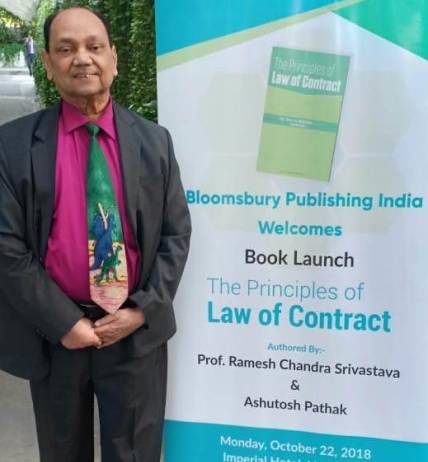 Medical science may boast of many a cancer survivor but former eminent professor of law, late Prof Ramesh Chandra Srivastava, 76, surely was a cut above the rest. He defied the writ of cancer and nullified its sentence of capital punishment meted out to him. Though he signed off just after launching his magnum opus ‘Principles of law of Contract’, he left an inexhaustible fund of inspiration. But for his sudden departure for his heavenly abode, he would have penned many more books.

He left but his story will forever live. He was an exemplary cancer survivor.The frail looking affable (Prof) Srivastava turned out to possess nerves of steel when confronted by the frightening disease. His audacity in the face of deadly Multiple Myelomas (Blood Cancer) was monumental indeed. He did not freak out when diagnosed; instead he turned the table on it and got down to write a seminal book on law. His book ‘Principles of law of Contract’ is a masterpiece and posthumously getting rave reviews in the comity of jurisprudence. His pen proved mightier than the cancer.

And Prof Srivastava was not one to rest on his laurels. He was raring to pen more books, two already being in the pipeline, blithely oblivious of the plan of providence. Being a repository of legal knowledge, he was being avidly looked at as writing as many books as he could because law students need them. And surprisingly enough, he was game and seemed not a wee bit tired! You might as well say instead of becoming bed ridden, he was ‘book written’.

On the occasion of his book launch on October 22 in Hotel Imperial, satisfaction was writ large on his face. Beaming with confidence, Prof Srivastava had said, ‘I do not fear for my life. My only wish is to leave behind as much for posterity as I can. When I was diagnosed with cancer, the first worry that crossed my mind was what would happen to my project of book writing. I want to be in harness till my last breath. This was also the wish of my departed wife. She would often tease me saying ‘your students eulogise you for your teaching and you feel puff up by this much only. Why don’t you write books? ’
The book has been published by J.K Rowling (writer of the blockbuster Harry Potter) fame Bloomsbury publishing House, which speaks a volume about the importance and quality of his book ‘Principles of Law of Contract’. The event was graced by Shiv Pratap Shukla , Union Minister of State, Finance, Dr K.G. Suresh, Director General, IIMS, Dr Anurag Batra, Chairman, Business World Media Group and many others from law fraternity who spoke highly of his popularity as a professor of law in Deen Dayal Upadhyay Vishwavidyal, Gorakhpur. Renowned journalist K.G. Suresh named him an icon and saluted his fighting spirit.

His eldest son Swadeep Srivastava, a well known health policy expert and healthcare entrepreneur, says, ‘He was indefatigable. After his retirement, he was far from hanging his boots. In fact, his real career began after his retirement. In place of calling it quits, he became more intense in his academic endeavour. My father came to Delhi to stay with us and started teaching in a law coaching institute in Noida, taking a number of classes in a day. Even cancer could not stall him in his tracks. He was and will remain infinitely inspirational for us in the family. I was astonished to see him get down to writing book in between chemotherapy sessions. The loss his demise has brought to our family and the law fraternity would never repair.’