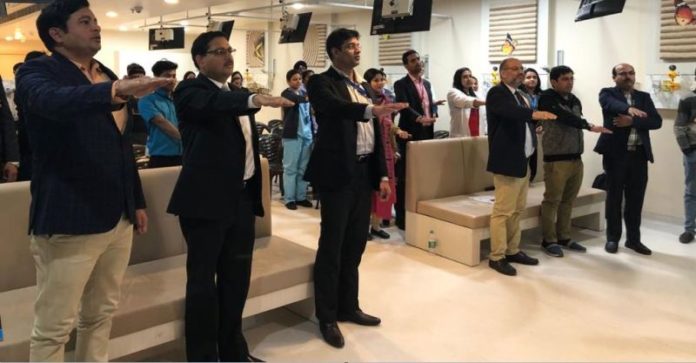 New Delhi: Charity begins at home. So when Manipal hospital chose to emphasise the ill effects of smoking and tobacco on the occasion of World Cancer Day, it decided to motivate its own personnel to shun smoking which is a major cause of cancer. And it is only in the fitness of things that a hospital and its crews should lead by example in matters of healthy behaviour.

The nudge seems to have worked as workers of the hospital took a pledge to kick the butt. Tobacco consumption is a major cause of cancer and every year lakhs of people die of cancer caused by the habit.

The hospital conducted a training of healthcare professionals, which was led by Dr. Vedant Kabra, Head of Department, Surgical Oncology and team, in association with National Tobacco Control Programme, South West Delhi, which was headed by Dr BS Charan (SPO, NTCP, Delhi).

Speaking about how tobacco consumption can lead to cancer, Dr Kabra said, “Tobacco is the biggest menace in society as far as health is concerned, killing nearly 14 lakh Indians due to cancer and other chronic diseases every year. Almost half of all the cancers can be attributed to tobacco taken in different forms (smoking or chewing). It is important to avoid initiation of tobacco use because once habituated, it’s very difficult to quit forever.”

The doctor further highlighted the common causes of cancer, symptoms associated with tobacco-related cancers and what precautions one can take to reduce the risk.

The hospital personnel, that are regularly exposed to tobacco smoking and partake in the consumption of Gutka, were encouraged to participate. The training was imparted in an informative manner to educate the attendees from various departments of the hospital such as house-keeping, maintenance, food and beverages, among others. In the end, the motivational training concluded with a pledge taken by the attendees that they will not smoke.