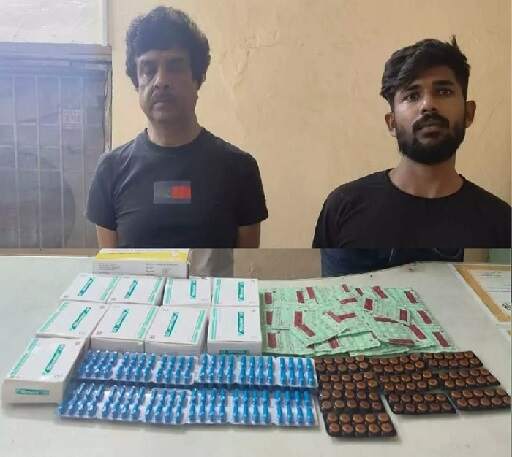 Raipur : Raipur Police has arrested two persons who were in the business of narcotic tablets. One of them is also the owner of a medical store. This businessman used to keep intoxicating tablets in his drugstore and used to sell them to smugglers.

The Anti Crime and Cyber ​​Unit of Raipur got information that a person had come under the under bridge in Chunabhatti area to deal with some intoxicating tablets. After this input from the informer, the police reached the spot and caught a young man. During interrogation the young man revealed his name as Deepak Rao. Deepak is a resident of Gudhiyari area and the police got tablets named Nitro 10, Lomotil and Spasmo from him.

When asked how this tablet reached Deepak, Deepak revealed a big secret. Deepak told that a medical store owner of Mahasamund used to give this tablet to him. He used to sell these in the market. The name of the owner of the medical store is Manoj Bansal, after the input from Deepak, the police of Raipur reached Mahasamund.

Taking full care that Manoj Bansal should not abscond, the police team went to Pithora in Mahasamund. Raid on Manoj Bansal’s Bansal Medical Store. On seeing the police, Manoj got angry and did not understand anything. He started making various excuses regarding the stock of medicines. After searching the inner room of the medical store, the police found a huge stock of banned intoxicating tablets.

After this Manoj confessed to giving the tablet to Deepak. Manoj, who runs a medical store, used to sell drug tablets to miscreants like Deepak Rao for the sake of profit. The police are now also checking its old records so that other people associated with this racket can be traced. At present, Deepak and Manoj have been arrested. 1200 Nitro 10 tablets, 600 Lomotil tablets, 240 Spasmo tablets have been recovered from them.