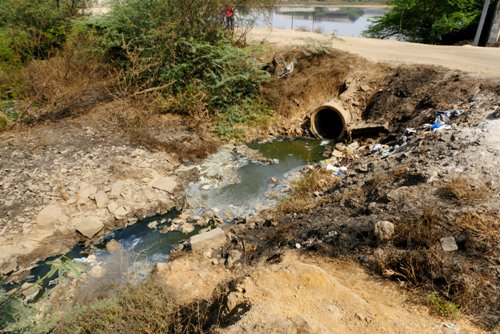 Considering the death of fishes on a large scale in Gandigudem and Gaddapotharam lakes during heavy rains on October 3 and October 4, because of the contaminated water that entered from the industries, the Telangana State Pollution Control Board ordered industries mostly pharma industries to pay Rs 1.03 crore as a compensation to fishermen cooperative societies under the `Polluter Pays’ principle.

TSPCB called suspected industries on hearing the district fisheries officer, Sangareddy. A representative of the Central Pollution Control Board and the representatives of the fishermen cooperative societies of Gandigudem and Gaddapotharam also attended the hearing.

The fisheries department has fixed the loss as Rs1.03 crore and TSPCB directed 18 industries to pay Rs 1.03 crore to the fishermen as a loss compensation. A decision has been made with the clear examination of the analysis reports of the samples collected from the tanks, nearby drains and from the industries, the reports that appeared in TOI. TSPCB also held an emergency Task Force review meeting and evaluate the case of the mass death of fishes in Gandigudem and Gaddapotharam lakes. TSPCB has given the time until Saturday to the companies to deposit Rs 1.03 crore in the district collector’s account for disbursement to the fishermen co-operative societies of Gandigudem and Gaddapotharam.

Except for this penalty, the committee took this case seriously and instructed industries to submit a time-bound action plan to manage industrial pollution and rainwater from the industries within two weeks. The action plan shall be prepared scientifically with cost estimates and timelines recommended by the committee.