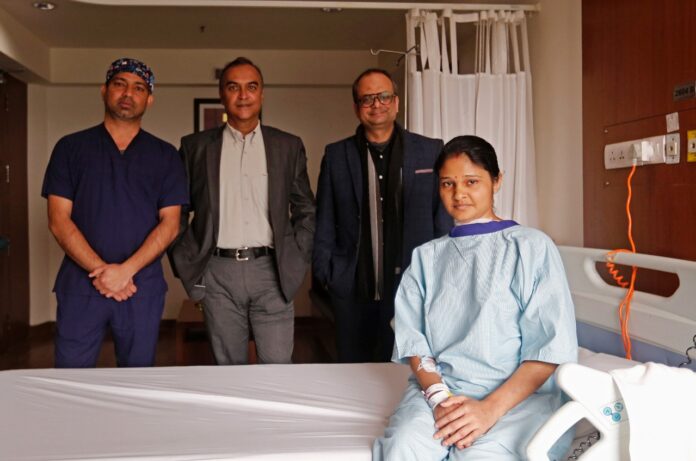 New Delhi: Ms MN a 31years of age patient from  Kota (Rajasthan) was suffering from a rare form of hereditary disease and  was successfully treated by Dr Arun Prasad, senior consultant, Surgical Gastroenterology and Bariatric Surgery and Dr Suresh Singh Naruka, Consultant, ENT, Indraprastha Apollo Hospitals along with  a team of doctors who  performed a highly complicated surgery.

The patient was suffering from MEN Type 2A which is quite predominant in the western part of the country. Multiple endocrine neoplasia type 2A (MEN2A) is an inherited condition that involves a tumor of excessive growth of at least two of the thyroid gland, parathyroid gland, and adrenal glands. Problem lies in the fact that there are no specific symptoms that could pick up this disease early. It is an uncommon condition that affects approximately 1 in 35,000 individuals.

The patient presented with a history of hoarseness of voice and swelling in the neck which was developed 2 months ago. Post evaluation it was revealed that she had developed tumour in the thyroid and another in adrenal gland (an organ that lies near the kidney and pancreas of the person in a remote place in the tummy). A positive family history was noted as two very close relatives also had Medullary Carcinoma Thyroid. Tumor of adrenal can cause devastating fluctuations in blood pressure leading to stroke, bleeding in brain etc.

Explaining about the robotic surgery Dr Arun Prasad, senior consultant, Surgical Gastroenterology and Bariatric Surgery at Indraprastha Apollo Hospitals said, “In and around Kota (Rajasthan) there is a rare disease that is affecting the people. Ms MN is one such unfortunate victim of this rare hereditary disease. In the past her brother and father both succumbed to this fatal disease. The condition known as Multiple Endocrine Neoplasia (MEN Type 2A) affects hormone producing glands of the body. Problem lies in the fact that there are no specific symptoms that could pick up this disease early. Hence public and healthcare awareness is of paramount importance. All blood relatives and people in the village need genetic and medical screening for the disease.”

“This kind of major surgery requires large incision with severe post-operative pain need for ICU stay and long recovery period, but with robotic surgery patient was shifted directly to the room after surgery. Patient tolerated the procedure well, postoperatively was managed on medication with serial examination of serum calcium levels. Within 48 hours of the surgery, the patient was fit to be discharged,” said Dr Prasad.

Dr Suresh Singh Naruka, Consultant, ENT, Indraprastha Apollo Hospitals said, “An accurate diagnosis followed by surgery at an early stage is a useful intervention for management of MTC in MEN 2A mutation carriers. This early prophylactic surgery remains the only curative option as RET tumours are prone to metastasize early and are resistant to chemo as well as radiotherapy. An early diagnosis and timely treatment are essential for their survival. Therefore, a radical approach both from a therapeutic and surgical point of view was undertaken.”

“A rare disease like this requires a high grade of suspicion, advanced investigations and modern techniques like robotic surgery and nerve monitoring to save lives after early detection and early intervention. On 14th January, 2021 the team conducted the very complicated surgery. Thyroid surgery was very challenging as right vocal cord was already damaged and tumour was compressing major neck vessels saving the other vital organs in vicinity were of paramount importance,” added Dr Naruka.

Adrenal surgeries in such cases are very much complicated and life threatening due to high chances of rise in blood pressure while performing the surgery and serious complications. Robotic surgery was suggested to minimise the handling of gland and hence operation becomes of minimal risk.

A multidisciplinary approach was required hence along with departments of ENT, Head and Neck Surgery, General & robotic Surgery and Endocrinology were incorporated for further management. Hence the team comprised of Dr Abhishek Tiwari, Dr Shagun Sareen and Dr Raman Raina

Expressing gratitude patient Ms MN said, “I was extremely lucky to find such experienced and kind doctors. Thanks to Dr. Naruka and Dr Prasad for being supportive and giving me the mental strength to go through this long journey. Today I am living a pain free life for which I am extremely grateful to all the team members of Indraprastha Apollo Hospital.”